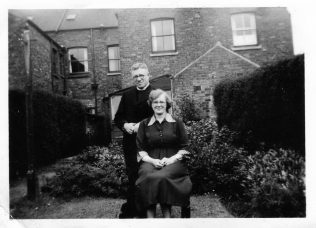 ELIJAH GREEN: born on 18th August 1897 at Stocksbridge, Yorkshire and died on 7th October 1981 at Horbury, Wakefield in the eighty-fifth year of his age and the fifty-ninth year of his ministry. At his  own request there is no further obituary.

Elijah was born on 18 August 1897 at Stocksbridge, Yorkshire, to parents Charles, a coal miner, and Bertha.

Rev. Elijah and Mrs Green (103 KB Adobe Acrobat document, opens in a new window)
A reminiscence of Elijah and his family by Jane Richardson