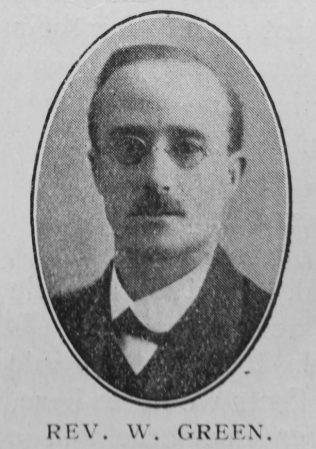 WILLIAM GREEN: born at Bampton, Oxfordshire, in 1879. The son of non-churchgoing parents, he was led to know Christ by a Champness Hall Sister. This was the foundation of his high appreciation of the work of the Deaconess Order. He entered Hartley College in 1903 and began his ministry at Abertillery in 1905 After completing his probation at Wallingford he spent three years at Princes Avenue, Liverpool, then four years at London Road, Reading. His ministry at Driffield was cut short by the call to the army chaplaincy, and in 1918 he was appointed to Alfreton, Derbyshire. His patience and skill were tested to the full by a difficult situation, but his five years there were a wonderful success and strengthened the circuit for years to come. After two years in the adjoining circuit of Ripley he was placed by Conference in mission work in South East London. He gave the next thirteen strenuous years to the type of work he loved best, seven of which were spent at Surrey Chapel. In 1939 he returned to rural work at Stewkley where he continued in active evangelism and undertook special missions for neighbouring circuits. After eight years he moved to Oakengates, from which circuit he retired in 1950 after completing forty-five years in the active ministry. Accepting the post of active supernumerary at Watchet in the Williton Circuit, he ministered yet another twelve years. He thus gave fifty-seven years to the care of souls.

He was a true Methodist, living a carefully ordered life, and for him everything had a proper time. He loved a quiet pipe as he studied, and the company of his dog on his daily walk. He prepared carefully for every service and business meeting. He had a great gift at annual meetings for persuading church officers to change around and to make room for younger people. His faith was founded on the experience of conversion. His testimony a few days before his death was: ‘I am relying on the love of God, there is nothing else.’ He died at Watchet, among the people he loved, on 4 November 1968, in the ninetieth year of his age and the sixty-third of his ministry.

William was born on 11 August 1879 at Bampton, Oxfordfordshire, to parents George Henry, a butcher, and Ruth.

The 1901 census return records William as a PM evangelist.

He married Rosa Price (1885-1966) in the summer of 1909 in the Bedwelllty Registration District, Monmouthshire. Census returns identify one child.