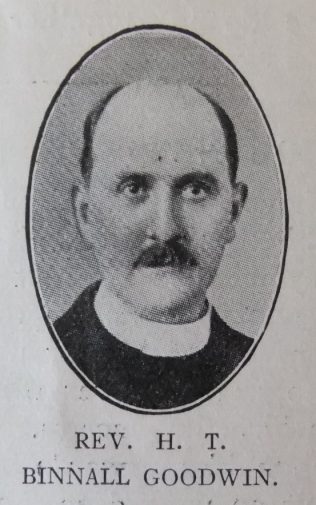 Henry was born on 28 August 1871 at Tunstall, Staffordshire to parents John William Goodwin and Matilda Eliza Binnall. John worked in the pottery business and in 1891 is identified as a potter’s general manager. Henry’s brother, Rowland, was also a PM Minister.

Henry trained at first for the teaching profession and qualified as a headmaster, but in response to the call of his native circuit he gave himself to the calling of the ministry.

Henry’s obituary records that he never sought place or power or public favour, and therefore his good work was rarely chronicled in popular ways, but he did that steady, solid work, which is chiefly needed, of building up churches and Christly characters.

He was a preacher of more than average ability – forceful, logical, winsome. His soul was steeped in the Bible and the best literature. He read widely and well, and had a passionate love for science, history, poetry and theology linked to an ardent sympathy with all living things.

It was as a pastor he excelled. Gifted with a natural genius for friendship, with a fund of humour, and overflowing with the milk of human kindness, loving little children, and a brother and friend to all, he won his way to many hearts, and his visits were a gracious benediction to many homes.

Henry married Emma Newns (b1874) in the summer of 1899 within the Atcham Registration District, Shropshire. Census returns identify two children.