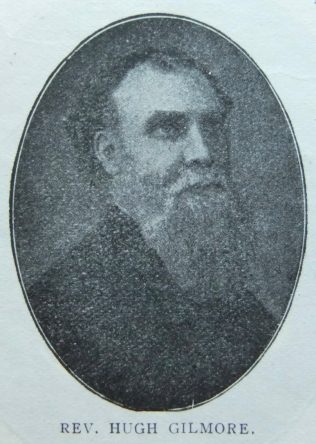 My first Circuit was Blyth, and there Hugh Gilmore had travelled some years before. It was a powerful Circuit with about a dozen places and three ministers. My colleagues were Robert Clemitson – one of the ablest preachers and the most capable superintendent the writer has ever been associated with—and Walter Howchin, F.G.S., a preacher of rare gifts and fine spirit. There was an exceptionally strong staff of laymen, and hosts of sermon tasters all over the Circuit. How they gathered to the colliery chapel on a week-night, and how they listened to the sermon. What stories were told over the fireside of the preachers of a past time – of their idiosyncrasies, and above all, of their sermons. Hugh Gilmore was the king of them all. They never tired of recounting his exploits, his humorous sallies, his great achievements and his occasional great failures. One got a vivid impression of the man, and long before I had the privilege of meeting him I had formed a pretty clear idea of his gifts as a preacher.

Among his exploits I recall the story of how, at a certain place, a famous preacher was to serve on a special occasion, and there was one particular family that Gilmore had rubbed the wrong way somehow, who made invidious comparisons, with a view to impressing the people with the idea that the stranger was far and away superior to Gilmore. These remarks were made to the men who were always singing their favourite’s praises. The two men were to be the speakers at the Saturday night meeting, and expectation was on tip-toe. Two such men were certain to give speeches of the finest order. Gilmore was the first speaker on the occasion, the stranger, as usual, being reserved till the last. Gilmore “got on his high horse” as they used to say, and roused the meeting to the highest enthusiasm. The oldest member had never heard anything like it, and Gilmore’s friends were delighted. The stranger came on under immense disadvantages, and able man as he was, his speech fell flat after the tornado of eloquence that had preceded it. Gilmore‘s friends were jubilant, his other than friends wore a subdued air for some time afterwards.

But it must not be supposed that Hugh Gilmore was an orator after the fashion of the time. A somewhat tinsley, meretricious, rhetorical silver-brook and star-spangled type of eloquence had come into vogue in certain quarters at that time. Gilmore’s oratory had nothing of the kind about it. He often moved on a very high plane of thought even in speeches and lectures. His hearers were required to think. But there was ever and anon a flash of humour, a touch of humanness that lit up the argument, and the whole was suffused with a glow of passion that carried everything before it. His oratory was sui generis, modelled after nobody else’s, and born of the extraordinary experiences through which he had passed. Greatly influenced by his environment, and prone to depend a good deal on the inspiration of the moment, he occasionally had ludicrous failures. His bad times were very bad indeed, while his good times were magnificent beyond words.

He was just coming into Connexional fame when I first met him. Perhaps it was a year or so before he made his real debut as a Connexional celebrity; but he was becoming known as a man of unusual gifts throughout the great Sunderland District. It was at my first District Meeting, I think, that I was introduced to him. How kind and genial he was. To a young man his friendliness was delightful. He was then, as always, full of some new book or some new idea, and he would talk philosophy to a novice like myself as if I had been an old friend who moved on the same intellectual plane as himself. It was wonderful how he was dominated at this time by intellectualism. Later he came in contact with a people who by their deep religiousness mellowed and enriched his nature, and gave a new spiritual bent to his thinking and preaching. I have reason to believe it was he who put the then Editor up to asking me to write a story for the MESSENGER some years later, a thing I had never attempted up to that time in any shape or form. The result was “ Rutherglen: A Story of the Scottish Covenanters.”

Afterwards I heard Gilmore preach and speak on several occasions. I heard him when he spoke as one inspired, and also when he made something like a fiasco of it. There are not a few still living who recall some of his speeches as the greatest feats of oratory to which they ever listened. He spoke always with a decided Scottish accent, and in the main this added to the effect of his oratory. But he required an audience fit if he was to be at his best. With those who valued sound rather than sense, and to whom rhetoric was everything, he was often unintelligible. And yet no man of his time could on occasion grip a meeting of the common people as he could, and raise them to the highest enthusiasm. His sermons were strong meat, but fresh, striking and intensely human.

I recall the very last Conference at which I heard him speak. On the Sunday the rain came down in torrents and the Camp Meeting had to be held indoors. Two stands of preachers had to be crowded into that afternoon, and the conductor allowed each some seven or ten minutes. The last speaker was Hugh Gilmore, and the conductor in introducing him remarked that there would have to be a little extension of the time in this case. Gilmore’s address was unique. He took no text, but went straight for the minds of his hearers and then for their hearts. Every sentence told, and yet it was all as different from the ordinary Camp Meeting address as could be imagined. He wound up with a story of a fisherwoman on the North-East coast who had lost her son. We saw her wandering on the shore, hair streaming in the wind, eyes strained to get a glimpse of a sail that would never be seen again. We heard the anguish of her tones as she spoke of her boy having gone down, and he unsaved. Then Gilmore asked her if, supposing her boy at the last had turned to God, and she had been in the Almighty’s place, would she have listened to his cry for mercy? I can still hear Gilmore’s response for her, “Aye, wad ah,” and the tone in which he asked her if she thought she was more compassionate than God. It thrilled the vast audience and coming after a conscience-awakening talk on sin, produced an immense impression.

At that same Conference there was an innovation in the shape of a Meeting for Electors. A layman, Mr. W. Hill, from Scotland, was the first speaker. He scored as he urged that politics should not be left to the pot-house, but that Christians should take their part in making politics and government Christian. Dr. Samuel Antliff followed with one of his fine, strong, argumentative and common sense speeches. It seemed to me that there was nothing left for the last speaker. The whole ground had been covered. But Hugh Gilmore outshone them all. He was evidently suffering from a splitting headache, but his speech lifted the whole theme on to a higher plane. That speech was a turning point in my own life. It was a revelation of what politics might be and ought to be, and its chief points have constituted, in the main, my working political creed ever since. I shall never cease to be grateful for that speech.

As has been indicated, Hugh Gilmore as a preacher had the defects of his qualities. His methods of preparation might be called general and inspirational. He relied often too much on his power of thinking on his legs. He always had a great many irons in the ?re, and something had to go to the wall. He never had the advantage of early mental discipline, having come to manhood before he knew anything of religion. But his wonderful insight, his philosophical temper, his large outlook and strong mental grasp gave him enormous advantages in handling a great theme. His Gospel was a gospel for the age. He spoke to his time with the authority of a prophet. His presentation of the truth came to thoughtful men with the force of a new revelation, and it is not surprising that, coming to a new colony like New South Wales and a city like Adelaide, he filled the minds of men with wonder and delight. Crowds of all classes attended his ministry, and when he died there was such mourning as had never been witnessed before. His volume of sermons, published after his death, and taken down as they were spoken by a reporter without his knowledge, give very little conception of the power of his preaching. With Hugh Gilmore, above all men, the charm and inspiration of the spoken word counted for a great deal. Take him all in all, he was a great man, a marvellous preacher of the Word, a true humanitarian and a genuine philanthropist. But above all, as a preacher we ne’er shall see his like again.

Hugh was born in 1842 at Glasgow, Lanarkshire, Scotland.