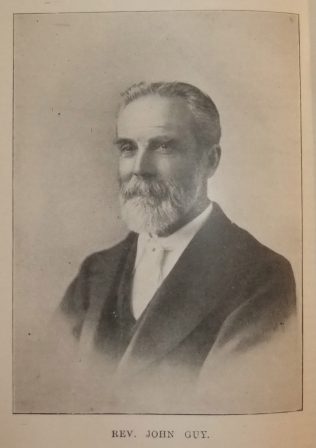 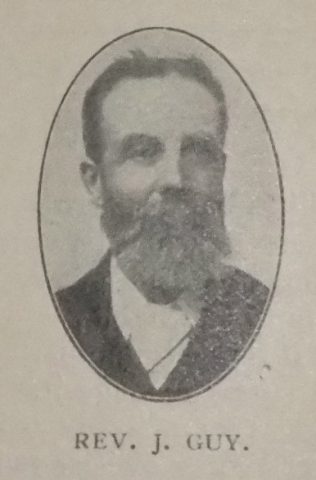 John was born on 2 October 1845 at Hertford to parents John Guy and Mary Sargeant. John senior was a PM Minister. John’s brother, James, became a PM Minister in New Zealand.

John was converted through a sermon to young people by Rev G Wilkinson, pastor of the Congregational Church at Chelmsford, a place or worship he was desired to attend occasionally by his employer. Shortly after conversion, John was bound as an apprentice to the drapery business for a term of five years. Despite opposition from those who deemed it expedient that he become a Congregationalist, John joined with the Chelmsford PM society which at the time was feeble and worshipped in an unpretentious building in Springfield. He worked in the Galleywood Common, PM Sunday School for about eight years.

John started the journey towards local preaching about a year after his conversion He was planned on none or ten Sundays per quarter, but never missed his attendance at the Sunday School, which required a six mile round trip in addition to other journeys on the Lord’s work on a Sunday.

In May 1866, John was appointed by the General Missionary Committee as a special help for his father at Maldon. John senior had by that time fallen into poor health on an extensive station. The same station pledged John at the conference of 1867.

His obituary records that John was healthy and happy, a cheerful Christian, fond of music and song. He was methodical, orderly, and in some things, precise. Carefulness marked the man, in dress, in speech, in handwriting, in his whole deportment, in the preparation and delivery of his sermons, in all matters of detail, for small matters as for large, and for small congregations as for large ones.

John died on 5 March 1924 at Mortimer, Hampshire (in the Silchester circuit).