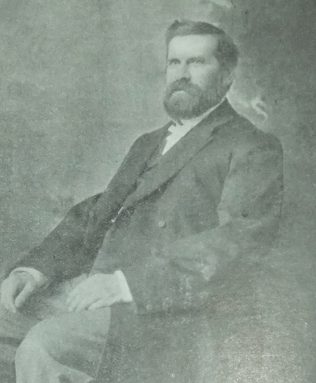 John was born on 24 May 1844 at Lanchester, Co Durham to parents John Gair and Mary Stokeld. John senior kept the village inn, but soon after the birth of John he was converted by the Wesleyans and found alternative work in Darlington as a blacksmith with the North Eastern Railway Company.

The family worshiped with the Wesleyan Society at Bondgate until the Reform Movement reached the town in 1850. The Gairs then moved to the Primitive Methodist Queen Street Society.

John was converted at the age of ten under the ministry of home and Sunday school. However, it was not until the spring of 1857 that he was made a member at the Queen Street Society. He received his first class ticket from Rev Joseph Spoor.

John received his education at Mr Tennant’s Commercial Academy in Darlington, obtaining a sound and practical training for business life.  At the time of the 1861 census, John was working as a solicitor’s clerk for George Allison, Esq. He worked mainly on conveyancing, which would become extremely useful in later life.

John was appointed to accompany a local preacher at the age of seventeen and two years later went of ‘full plan’. In 1865, John was one of fifteen young men from the Sunderland District who entered the ministry.

John built new chapels at Belgrave Gate, Thurmaston, Barkby, Syston and Catherine St Ansty. He also secured the land for many other chapels and schools.

John became Governor of Elmfield in 1896. Under his direction the buildings were significantly extended.

His obituary records that John was  a Christian gentleman – he was gentle, tender, kind, chivalrous, and yet firm, outspoken, brave and equal to any emergency when duty called, or his Church demanded of him.

He was an intelligent, earnest, evangelical preacher of the glorious Gospel; and in that he was most acceptable and successful.