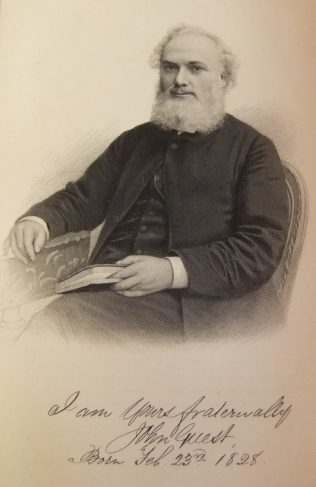 John was born on 23 February 1828 near Stourbridge, Staffordshire. His mother’s family included two Wesleyan ministers. John was one of four brothers and two sisters. One of his brothers became a Wesleyan minister and a second an Established Church clergyman.

John’s father died when he was 8. He was brought up by his paternal grandfather who ensured he went to Stourbridge Grammar School until the age of 13. John was converted shortly after leaving school through the ministry of Rev J Graham.

His first attempt at preaching, quite acceptable by accounts, was unexpected when he attended a chapel of the New Connection expecting to hear a former companion preach. The companion prevailed upon him to take his place in the pulpit. Feeling unworthy to take up the call to preach, John was 18 before he went on the plan.

John was induced by the wise advice of John Petty to accept a call from the West Bromwich Circuit into the ministry.

The PM magazine of 1877 records; ‘His sermons as to form are generally textual. They are however, anything but dry, for the preacher presses into his service poetry and history, facts and figures, scriptural and general truths, experience and imagination, weaving all together in perspicuous sentences which are uttered with ease, pathos and power.’

In 1880, John took a tour of the Holy Land which he greatly enjoyed.