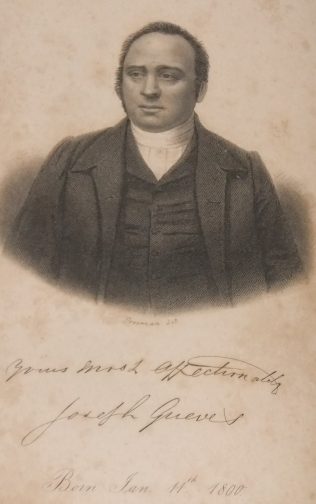 Joseph was born on 11 January 1800 at Auckside, near Middleton in Teesdale, Co Durham. His family had originated from Scotland. Joseph attended school until the age of 14. Although he had been deeply affected by a sermon preached by John Hall, a Wesleyan local preacher, when aged ten, as Joseph grew up he became addicted to drunkenness, profane song singing and poaching. He had several  close shaves with the law, indeed his father died whilst he was on bail awaiting a trial at Durham Crown Court. He managed to avoid serious punishment and became convicted of his sin. It took some 12 months before he found his peace at a lovefeast held at Westgate in May1824, where John Hewson was the preacher. His name appeared on the plan in 1825. Around this time Joseph was instrumental in conversion of John Leekley, the founder of Primitive Methodism in the Western States of America.

Joseph’s first placement from the Hull circuit in 1826 was at Barnard Castle. After three months he moved to Westgate and Alston. In 1829 he opened St Ives, preaching there for the first time on 29 June . When he preached there again on 5 August a crowd of over 2000 people had gathered to hear him. A large chapel was built and Joseph preached at the opening.

In Cwm and Birmingham, Joseph had successful ministries. However, his time in Tunstall was a time of sadness when his wife died in 1840 after giving birth to a fifth daughter.

At Wrockwardinewood, Joseph had a period of poor health which continued to re-occur for the remainder of his ministry.

As a minister he was useful in the conversion of sinners. His preaching was solid rather than showy; calculated to instruct rather than to dazzle. His sermons were well studied and contained the pith of the Gospel.