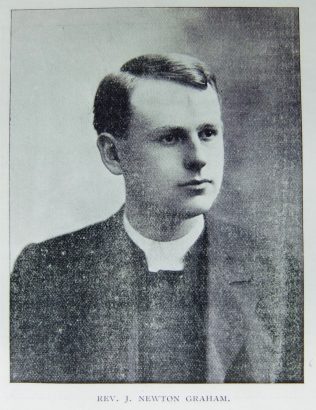 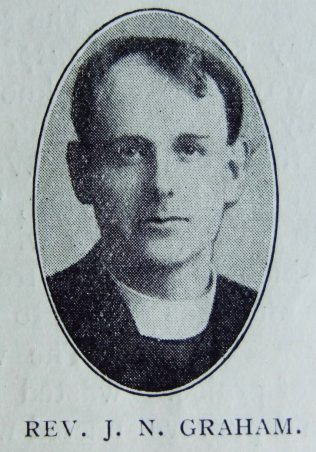 That father and son in our ministry should be called home in their prime is a family tragedy and a great loss to our Church. Just over thirteen years ago the Rev. R. Graydon Graham passed to the Homeland, and now his eldest son, the Rev. J. Newton Graham, has been translated. The Conference of 1902 appointed the son to take charge of the Sunderland I. Station, which had been left vacant by the death of the father. There were those who doubted the wisdom of appointing one so young – for the Rev. J. Newton Graham was but twenty-four years of age at the time – to such a responsible position; but so ably and successfully did the son continue the father’s work that his stay was extended to five years. From Sunderland Mr. Graham moved to West Hartlepool as second minister. In this capacity he served four years. His worth was testified to by the fact that, at the end of four years, he was called to be superintendent of the same circuit. This position he filled with credit to the honoured name he bore, and to the Church, for other four years. Thirteen years of his ministry were thus spent on two circuits.

Born at Newcastle during his father’s ministry in that city, as a boy he spent four years at West Hartlepool, making a total of twelve years in the town during a brief life of thirty-seven years. Afterwards going to Middlesbrough he was left behind, when the family again moved, to finish his education at Middlesbrough High School, where he had a most successful career, which gave rich promise for future days. At the early age of sixteen he was preaching the Gospel, and when eighteen he became hired local preacher on the Gateshead I. Circuit. For a brief time he supplied for the Rev. John Wenn  at Long Eaton. He rendered assistance to the Rev. Jos. Dinnick on the Hove Branch of the Brighton Circuit. Then commenced his four years’ probationary period as a minister of our Church. Two years were spent on the Brighton Station with the Rev. Jos. Dinnick and two with the Rev. E.J.T. Bagnall at Croydon. It was towards the end of his first year as an approved list minister at Fakenham that his father died at Sunderland, and 1902 witnessed his removal from Fakenham to take up the work laid down by his father.

Eighteen years – what a brief term! – is one of the first thoughts when we think of the passing of our esteemed brother. Ah, but the number of his years is not the measure of a man’s life! Verily Mr. Graham’s life was so eaten up by the zeal of the Lord’s work that, on reflection, we declare that he did the work of a long life in a short period. As the Rev. H. Carden, who laboured side by side with him for three years, has written:— “He was an early riser; he would be in his study every morning for hours before the ordinary minister is astir.” He was intensely eager to buy up every moment and opportunity for the work of the ministry he so much loved. The culture of his own mind and soul were regarded as an integral part of his programme. The early morning found him in communion with the Eternal Father. From this intimate fellowship with God he passed to the enrichment of his mind with a view to the development of the spiritual life of his churches. His sermons gave evidence of much thought and fervent prayer. Nor did he neglect the pastoral side of his calling. Daily was he to be found in the homes of his people. Cases of sickness and trouble called forth his sympathy in abounding measure, and many are they who have experienced such on his Circuits who testify to his unfailing attention to them in their hours of darkness and need. Not only what our brother did, but what he was, do we remember with gratitude. The pre-eminent note of the very many letters of sympathy received by his beloved wife and mother was this: “He was a good man, and full of the Holy Ghost and of faith.” He expressed through his earthly body the sweet characteristics of a saintly spirit.

In the truest sense he was a great man. How this was revealed in his dreadful suffering during the last months of his life! For months his many friends were alarmed by indications of some physical trouble, but having been of robust health and strong physique, he pooh-poohed the idea of anything serious. Alas, the fears of those around him proved only too well founded. Early this year he was counselled to obtain the advice of a specialist, and on June 15th entered Leeds Infirmary. The malignant disease was discovered to have developed beyond management, and with his devoted wife he returned to West Hartlepool on July 8th. He had accepted the invitation of the Bradford VI. Circuit, but removal was out of the question. He lingered in agony until the 26th of August. But what a noble dying! Never a murmur escaped his lips. He was completely resigned to the will of his Father. Death had no terror for him. “There is no valley of the shadow for you?” tenderly asked his devoted wife, who was his constant companion in health and sickness, and the characteristic reply cheerily came:— ‘‘Not a bit of it!” He lived and died “as seeing Him Who is invisible.” Now he has joined the assembly of just men made perfect. His is “the crown of life.” The widow, so early bereaved, our departed brother‘s mother, sisters and brothers, have a memory to cherish which cannot fail to be a source of inspiration and joy. They find comfort in the thought of a glorious reunion.

And they will rejoice, too, as the years fly by in watching the growth of the harvest our brother’s hands have sown. Great and long-lasting must be the results of such a life as he lived, of the manifestation of such a character as he possessed, and other lives will furnish reminders of the departed in reproducing the lessons he taught, the example he set. It is not the wealthy man who leaves behind him the best inheritance, but the man whose life has been spent in the way that God has willed. Such a one was this dear friend, and those whom he has left behind will see the proof thereof for many days to come.

Joseph was born abt 1878 at Newcastle upon Tyne, Northumberland, to parents Rev. Robert Graydon Graham, a PM Minister, and Mary Anne Elizabeth Newton.