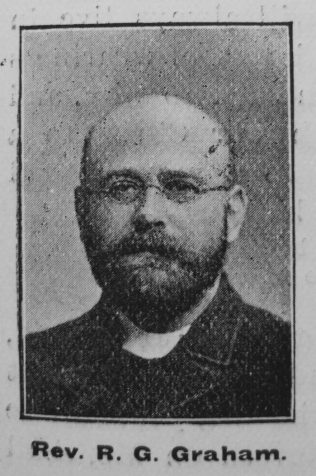 Transcription of Obituary in the Primitive Methodist Magazine by M.T. Pickering

Born, April 8th, 1848. Ascended, Feb. 19th, 1902. Comparatively a short span as we count time, but remembering that, – “We live in deeds, not years, in thoughts not breaths,” and remembering too: – “He liveth long who Iiveth well,’’ then it was truly in that higher sense a long and valued life.

Robert Graydon Graham was born at Sunderland, and from thence God called him to higher service and closer communion. He owed nothing in those early days to advantages or privileges; he was schooled in a hard school, and may-be facing those disadvantages largely helped to develop that strength of character which so conspicuously marked him. To overcome the defects of his education, soon as he knew a pardoning Christ, he commenced those years of close, persistent study, which continued until life’s end.

He laboured with untiring zeal on the following stations:- Berwick-on-Tweed, Gateshead, Newcastle-on-Tyne first, Hartlepool, Blyth (twice), Middlesborough, and Sunderland first, and on all those stations loving hearts tell of the joy of these days, and bear witness to the abiding impress of his vigorous personality. On his circuits he was highly successful. Sometimes he was called to do foundation work, at other times he had the joy of large, visible, success. In church building he was a safe counsellor. Cleveland Road Church, Sunderland; Linthorpe Road Church, Middlesborough; and Blyth Sunday Schools, stand out as some of his most important undertakings. In the more spiritual work he had equal success. He was aglow with spiritual fervour, and many owe their new birth to the Holy Spirit’s inspiration and guidance of his messages. The chronicles of his circuits record large accessions to the church’s roll. His pastoral visits were always helpful, more especially if the shadow of loss rested there. The tenderness of his nature was never really known by some until the dark days came, and then they discovered the deep wells of tenderness that were previously unseen and unknown.

We have seen his tears, the tears of a strong man, when loss had come to one he loved. As a preacher he took a high place. He had a lofty conception of the power and responsibility of the pulpit, and having with that a deep spiritual experience and a keen intellect, he won for himself a special place as a thoughtful, practical exponent of the Gospel. Invariably it was strong meat. He thought deeply, read widely, and prayed much. A true lover of the light of literature, above all he sought the light of the Holy Spirit. Out of his spiritual closet he came to tell the results of his own thinking and the findings of our sanest scholars, and also those things seen only by the spiritual eye and revealed only to the spiritual man.

He attained considerable eminence in our church as a scholar, being especially versed in theology and ethics. Our Connexional literature has been greatly enriched by his clear masculine thought. His initials or signature were always the guarantee for honest-work and sober criticism. His excellent handbook, on “St. Paul’s conception of sanctification,” has been a mine of spiritual treasure for many hearts. His Hartley Lecture, on “The Sabbath,” is recognized as a timely, able, and reliable contribution to a great theme. In style and thought it is no belated production but the findings of an alert thinker, a keen observer and withal a devout man of God. We had hoped for a spared life so that his pen might record for us more of his thoughts and experiences in those realms he especially loved, but God willed it otherwise. His one favourite subject was Holiness, and to that topic in conversation and in print he returned again and again. He revelled in the joys of that higher life.

It would be a very inadequate record of his life that took no note of his devotion and helpfulness to young men. His own early struggles begat within him a helpful, practical sympathy for others who struggled. Several occupying honoured places in our ministry and in our lay ranks owe their first lessons and their first great impetus to him.

His service was great, but the man was greater. You came to know him slowly, and to know him was to love him. As a colleague he was kindly, genial, considerate – one of the best of colleagues. His friendship was of a high order, so real and true, the friendship of a strong, true man. Strong, yet tender, the tenderness of true strength was his. We would write it again, strong, true, tender, such a man was R. G. Graham. The little folks loved him and merrily gambolled with him. Always deeply devotional, his later years revealed especially a ripening of character. His recent pulpit ministrations, his addresses at holiness conventions, his more private talk, were all of the good things of the Kingdom. He ripened quickly, and sooner than we knew, God called him higher.

May the God of all grace give comfort and strength to the widow in her loneliness and to the family who mourn. It was a great joy to him that one of his sons, the Rev. J. Newton Graham, became a minister in our church. May the memories of a good husband and a loving father help them always on to a fuller life. He is gone from us, yet the tarries with us. The good dead never die. He lives here, he will always live in many hearts, and in the hours of weariness and struggle We will turn back to him, and he will help us through our Christ to a higher, holier, and thus to a more useful life. No, he is not dead, he lives, –
“ In minds made better by his presence,
In pulses stirred to noble deeds of daring
and of rectitude.”

Robert was baptised on 30 April 1828 at Southwick, Co. Durham. His parents were Robert Graham and Ellifendy Graydon. Robert, senior, was a plate glass maker. Robert assisted him before entering the ministry.

He married Mary Elizabeth Newton (1852-1929) in the summer of 1876 at Gateshead, Co. Durham. Census returns identify five of seven children.