The Grandfather We Never Knew 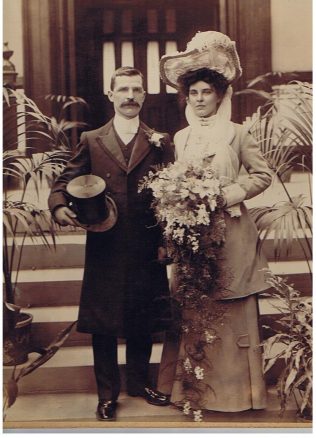 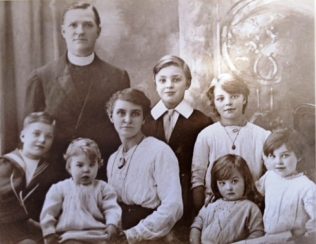 Our grandfather, William Edward Goodreid, was born in CanningTown, East London, in 1874.  His father Isaac, an iron worker from Bilston in the Black Country, had recently taken his family to London to seek work, which he found in the Thames Iron and Ship Building Works opposite what is now the O2 Arena.  When William was two years old the Goodreids returned to the Midlands and settled in Smethwick, where the young boy received his elementary education.  As soon as he was old enough he found work as a labourer in a local foundry.  The family already attended the local Primitive Methodist chapel and this early exposure to faith, plus his growing awareness of social injustice and poverty, and knowledge that a number of his forebears had succumbed to drink, seem to have encouraged the young man to enter the ministry.

In 1899, following a period as a candidate minister on the Saltburn circuit in Yorkshire, during which, according to local newspaper reports, he received the plaudits of his congregations, he entered the ManchesterTheologicalCollege, later known as the HartleyVictoriaCollege.  For a man with a limited and basic education the curriculum (which was extended into a new minister’s probationary period) was challenging: as well as theology and bible classes, it included Hebrew, Greek and Latin and, with an eye on the future, psychology and political economy.  But although the sixty students worked hard during their two-year course, there was also time for ‘jolly japes’, such as letting off fireworks in the dining hall!  It was during his time at college that William met his lifelong friend, William Clulow, with whom he was to share a double marriage five years later.

In 1901 the newly ‘Reverend’ Goodreid started his first posting, a four-year probationary period in the Thornley Circuit of CountyDurham, a semi-rural area of intensive coal mining.  One of the preachers on the circuit, who would have known William well, was the left wing Christian Socialist activist Peter Lee, after whom the Durham new town is named.  At the end of his probationary period in Thornley, William married Mary Ann Harrison, the daughter of a Stockton-on-Tees bootmaker and Primitive Methodist circuit board member.  At the same ceremony, on 29 June 1905, his friend William Clulow married Mary’s younger sister Lizzie.

After the wedding William and Mary moved to a new position with the Northumberland circuit of Amble.  Although today Amble is a pleasant coastal village, in 1905 the town itself was a bustling fishing port while the hinterland was again coal mining country.  The circuit was very much working class, typical of the areas where the primitive brand of Methodism flourished.  Despite the undoubted happiness of his marriage, and the opportunities of a new posting, these were difficult years for William: his father died in a Welsh workhouse and his sister was committed to a lunatic asylum in Morpeth.  Nevertheless William and Mary both worked tirelessly for their community.  In 1909 the Methodist historian Patterson wrote that William ‘richly deserves the thanks of the community for his loyalty, sacrifice and labour.’

During William and Mary’s tenure in Amble their first son was born, and then our mother Dorothy, shortly before the family moved to Burnopfield, back in CountyDurham.  Another mining area, with a population of ten per-cent immigrant Irish, William had to deal with the consequences of at least one teenager’s death underground while he was on the circuit.  One of William’s preachers was John Wilkinson Taylor who, in 1909, was elected as an independent Labour MP for the local constituency, one of the first ever socialist MPs.  Whilst at Burnopfield another son, Robert Vaughan, was born to the family.

In line with the Primitive Methodist policy of moving ministers every four years or so, in 1911 the family went to the Sunderland Fourth Circuit, centred on the docks and mines to the south of the city.  A further two children were born in Sunderland, Mary and Freda.  However the family’s time in the city was marred by the outbreak of war: Sunderland’s industry was vital to the war effort and the impact of war was soon very evident.  It came to the manse on the night of 1 April 1916 when a rogue Zeppelin unloaded its bombs on the unsuspecting city: they exploded all around the manse: 22 were killed and over 100 injured.  Although the manse itself was not hit, the attack gave our mother Dorothy a life-long heart problem.  When the Goodreids left in 1916 the accolade from the Board included ‘They (Reverend and Mrs. Goodreid) have laboured untiringly and unselfishly in the dark and anxious days of the war………they have keenly endeavoured to keep themselves in touch with those who have joined the Colours……..they have administered comfort to most anxious hearts at home……the Reverend Goodreid’s painstaking work in the pulpit has done much to make clear the sweetness of the gospel of Jesus’.

It was time for a change of industrial environment.  The family exchanged the mines of the north-east for the mill towns of Yorkshire, in 1916 Huddersfield and then, in 1920, Idle, on the outskirts of Bradford.  In Huddersfield their last child was born, Phoebe who, as we write, is approaching her 100th birthday.  The family was strong and close: Dorothy remembered a house full of learning and laughter.  In later life she especially recalled the ‘funny’ version of the sermon which William gave to his family each Saturday evening as a practice for the following day.

It was during this time that William began to operate on a broader stage.  He became well known in national circles, especially for his country-wide work for the temperance movement, becoming Connexional Temperance Secretary.  He also engaged in some acerbic public correspondence with George Bernard Shaw over the religiosity of his plays.  With the move to Idle in 1920, where he proved to be a highly popular minister and where he worked hard to promote friendship with other Christian denominations, William Goodreid seemed destined for a bright future.  Had he lived he would undoubtedly have been at the forefront of Methodist reunification in 1933.  But it was not to be.

In August 1923 William led a Christian Endeavour Holiday Tour to Jersey.  On the morning of 10 August a young girl in the party got into bathing difficulties and, after others had failed and the girl was being carried away in the current, William went in to rescue her.  He managed to bring her ashore but in so doing he damaged further an already weak heart.  In various articles the ‘Jersey Post’ commented on ‘the clerical gentleman who immediately divested himself of his clothing and went to the rescue’, and ‘this man who so gallantly rushed into the water’.  William Goodreid was rushed to hospital where for several days he was on the danger list: meanwhile his wife Mary Ann, hastening from Bradford to be by his side, had to wait fog-bound for many hours on the ferry off Jersey.

After several weeks William had recovered sufficiently to return home and to work, but his strength had been irreparably sapped by the ordeal.  He was awarded a Certificate of Gallantry by the Jersey Humane Society and a Certificate of the Carnegie Hero Fund Trust.  But on 19 July 1924 William finally succumbed, his death certificate stating the main cause of death being the damage done to his heart during the rescue.

The sadness of his death across the whole Methodist family, but especially among the community of Idle, was immense.  As the cortege processed to the moor-top cemetery, the local mills sounded their hooters in respect, and the workers lined the streets.  Forty local ministers led the procession and hundreds attended the graveyard service.  The Anglican parish priest wrote a long eulogy, saying, ‘The passing of William Edward Goodreid has left a blank in our parish……a man of earnest faith, strong personality, lively humour, great ability and true catholic spirit.  It was my privilege to count him among my friends.  His funeral revealed something of the huge affection and esteem in which he was held’. William’s friend, Reverend William Clulow, who himself was to be killed in a tragic motor accident a few years later, wrote a long obituary in the ‘Primitive Methodist Magazine’ concluding by saying ‘The name of William Goodreid will not soon be forgotten, and the spiritual harvests for which he has so plentifully sown will continue to be gathered for many years to come’.

Her husband’s death left Mary Ann Goodreid a 43-year-old widow with six children to support, and with only a small legacy from her husband’s will.  She had also lost her home in the manse and to some extent her place in the community.  However the local circuit set up a national ‘Goodreid Fund’ which raised over £1,500, the equivalent of about £70,000 today.  This enabled the family to move to a similar house across the road from the manse.  The Carnegie Hero Fund also granted Mary a small pension in recognition of her husband’s heroism.

The consequences of that heroic action robbed Methodism of one of its most powerful advocates.  It also deprived us of the grandfather we never knew.