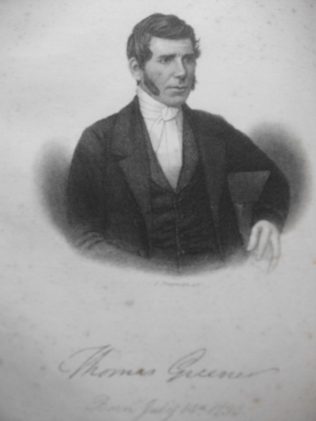 In 1807, Thomas started to attend the Sabbath School at Chester le Street where he was taught to read and write. In 1814 the family moved to North Shields where Thomas was converted through the Wesleyans. By 1821, he had a good knowledge of arithmetic, book-keeping, mensuration, geometry, land surveying and English grammar. In April 1822 Thomas started to teach in a day school. Around that time he started to preach.

Thomas joined with the Primitive Methodists following  marriage to his second wife who was a PM.

Mr J Ritson, the father of Joseph Ritson (The Romance of Primitive Methodism), was converted at Keenly under the ministry of Thomas Greener. Ritson senior became an influential layman in West Allendale.

His obituary records that Thomas was distinguished by great simplicity, considerable energy and fidelity. He could not do anything by halves; in whatever he engaged he did it with his might.

R Davies, A funeral sermon occasioned by the death of the Rev. T. Greener: The substance of which was preached in the Primitive Methodist Chapel, Huddersfield, January 1856: to which is added a brief memoir of his life, labours, and death, 1856