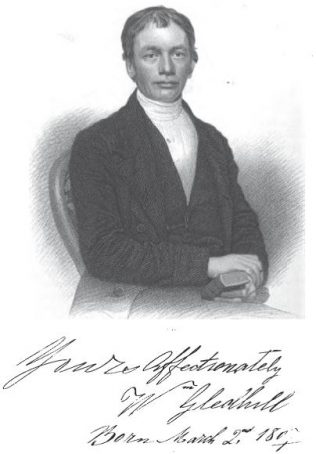 William was born on 2 March 1807 in Halifax, Yorkshire. He was converted at the age of 12 and joined a PM Society in 1821. In 1826 he became a Sunday School teacher, a role he fulfilled for eight years. At the age of 22, William became an exhorter and quickley moved onto full plan. In becoming an itinerant preacher, William was recommended by the Wakefield circuit.

He was one of a number of PM Ministers who were sent to Canada following a visit to Canada by Hugh Bourne in 1844.

William’s obituary includes these words. ‘Brother Gledhill was not learned, nor was he extensively read. He was pre-eminently “a man of one book”. He took no part in political agitations. He minded his work as a minister of Jesus, and was a paster to his people. His zeal was fervent, and his activity indefatigable. He was tender towards the afflicted, and charitable to all. His gratitude for favours shown knew no bounds. He was a true man. He ever sought to do and speak the truth. He was kind to all. He was frank and open and very outspoken. He was a man of strict integrity. In him was no guile’