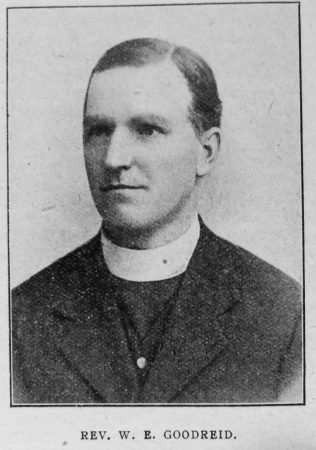 A great sorrow filled the heart of the Church when the news became known of the termination of so fruitful and successful a ministry as that of the Rev. W.E. Goodreid on July 19th, 1924. He was fifty years of age and had just completed twenty-three years in the ministry. On the following Tuesday, in the presence of some forty ministers and many hundreds of sorrowing friends and admirers, his mortal remains were laid to their rest on the heights of Idle where he had finished his work, like a brave soldier who finds sepulture on his last battlefield. Among those present were representatives of Connexional and local institutions, of Sunderland IV. And Huddersfield circuits, of every circuit and almost every Church in Bradford and the vicinity, and of sister communions, including the Anglican Church. The Revs. S. Palmer, W.R. Wilkinson, S. Rowley, Canon Forster, Vicar of Idle, took part in the service in the chapel and at the graveside, the Rev. W. Watson giving an address most tender and full of discerning appreciation.

Our dear friend knew what struggle was, even from his earliest days. But he triumphed. His native ability, his unbounded optimism, his remarkable courage were all resources of no ordinary kind, and, best of all, God had him in hand and placed before him the open door. As a hired local preacher and evangelist he manifested uncommon preaching power and witnessed scores of conversions. Then, after training at HartIey College, he entered upon his all too brief ministry in 1901. During his term at Thornley, where he spent his probation, he shared to the full in a wonderful revival, which many have good reason to remember. At Amble, his first superintendency, he opened two new churches, built two chapels and a manse, and saw an increase of eighty members, all in the short space of three years. Burnopfield next had the benefit of his strenuous labours, and then he passed on to Sunderland IV., where he did a great work among young people and initiated a most successful Boy’s Life Brigade. Huddersfield prospered under his inspiring leadership, and, on Bradford VII. Circuit, where he passed away, he was ever in labours more abundant. He gave long terms of secretarial service to his districts, achieving perhaps outstanding success in the C.E. department in the Sunderland District, witnessing as he did, most remarkable gatherings in the Newcastle Town Hall and especially with the Junior displays, some of which he wrote himself. He was a member of the Methodist Union Committee, Chairman of the Bradford Branch of the Temperance Council of the Christian Churches, a member of the Council of Forty, U.K.A., G.C.D., in 1919, and for the last five years he fulfilled the office of general Temperance Secretary of his own Church. In that office, as the Rev. W.M. Kelley says, “he did a giant’s work,” one of his biggest achievements being the raising of £1,000 for the Temperance Cause.

An outstanding thing in his ministry was the powerful influence he always exerted on young people. Even in the first days of his service for the Church, wellnigh thirty years ago, this was conspicuous and characteristic. Then what a companion he was! How he excelled in conversation. How easily, how naturally he would pass from the gay to the serious. If he was in a party he kept it alive. His cheery optimism, his broad sympathies and his warm understanding of human nature made him greatly beloved.

By many he will be remembered as the strenuous fighter, the impassioned evangelist, the platform orator, but that was not the whole man. Strong, purposeful, virile as he was, underlying the force and the vigour of his character was a wonderful tenderness. In the Temperance Campaign he wielded a right Jerusalem blade, but his blade was always for the selfish, the callous, the complacent. For the poor weak inebriate he felt nothing but a great compassion. Beneath the breast-plate beat a kindly heart. His spirit was indomitable, but his sympathies were wide as love.

His death was due to a very gallant act of life-saving at Jersey in connection with the C.E. tour of the previous summer. It was just like him to risk his life to rescue someone in danger. That deed of characteristic self-sacrifice was recognised during his life by the Royal Humane Society, and, since his death, by the Trustees of the Carnegie Hero Trust Fund, who have inscribed his name on their Roll of Heroes. He was a heroic soul. Often he suffered during those last months as none else knew and was sorely fatigued in every part of his bodily frame, but his spirit – his indomitable spirit went marching on. Our thoughts are ever towards the shadowed home, the mother, her two sons and four daughters bereft of the loved protection and care. A great heritage, however, is theirs, and the Father is with them. The name of William E. Goodreid will not soon be forgotten and the spiritual harvest for which he has so plentifully sown will continue to be gathered through many years to come.

William was born in 1874 at Canning Town, London, to parents Isaac and Elizabeth. Isaac was an ironworker.

Note: Follow this link to a further page about William.