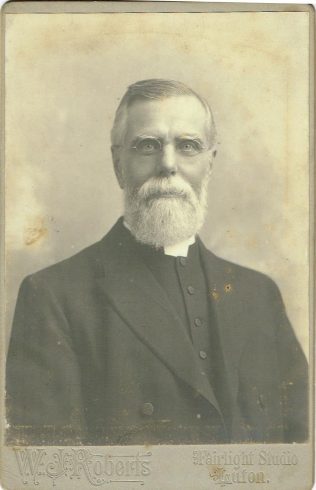 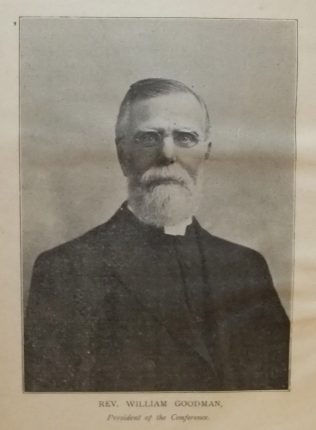 William was born in the spring of 1842 at Stelling Minnis, Kent, to parents Thomas Goodman and Elizabeth Mutton. His parents moved from Kent to the neighbourhood of Spalding, Lincolnshire when William was four years old. Here William attended the chapel at Little London. Later the family moved to Peterborough. William’s father worked for the firm of Sir Morton Peto & Co, contractors involved in building railways, as a sawyer.

After receiving the rudiments of an education, William started work with W.H. Smith & Co. He was transferred to the London headquarters and later took charge of the Birkenhead Railway book-stall.

Whilst at Birkenhead, William gave himself to Christ and joined the PM Church. He became a Sunday school teacher, an exhorter and finally an accredited local preacher. In 1860, aged eighteen, he became secretary of the Liverpool Y.M.C.A.

His obituary records that William made no pretence to profound scholarship, and he never attempted brilliant oratory, but he was a diligent and devout biblical student, and had a wide knowledge of those subjects that were of first moment to a minister of Jesus Christ. His thoroughness, his practicalness, his sympathy, and withal his firmness made him a Circuit minister of the first order.

However, it was as an administrator that William excelled. His clear thinking, and his equally clear speaking upon legislative and administrative questions, combined with his respectful and tactful treatment of both friends and opponents, won for him the confidence of leaders in Primitive Methodism.

William was President of Conference in 1899. Unfortunately, shortly after he embarked on his period of office, William was prostrated by a seizure and for several weeks lay between life and death. He recovered sufficiently to attend the next Conference, but was so enfeebled that he struggled to make himself heard. He returned home to Bournemouth with hopes of revering but passed away in April of the following year.

William married Mary Jane Thompson (1849-1915) in late 1868 at Birkenhead, Cheshire. The couple adopted a nephew, Arthur Edward Mould (1869-1945), who wrote papers on ‘Popular Science’ in the PM Magazine and worked as a schoolteacher in Chester.