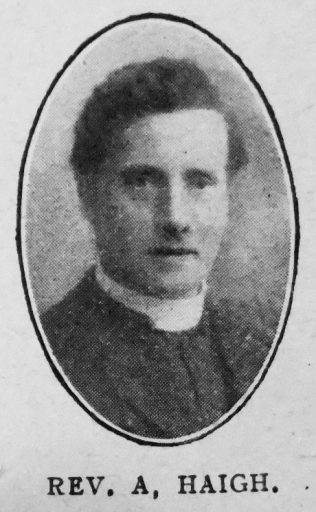 ARTHUR HAIGH: born in Hadfield, Derbyshire, in 1883. His desire to serve as a minister began in the years of his boyhood, and he was eventually accepted into the Primitive Methodist Ministry. Having been trained in Hartley College he began his active ministry in 1910, and served in the following circuits: Pembroke Dock, Abergavenny, Calne, Bristol Second, Skegness, Stoke-on-Trent (Hanley), Staleybridge (Canal Street), Burton-on-Trent (Mosley Street and Station Street), and Frome, retiring in 1948. As a supernumerary in Dawlish he served actively in a pastoral capacity for seven years, afterwards removing to Arnside, Westmorland, in the Kendal Circuit, where his last years were spent. During his ministry he served with distinction in some important District offices, and in Burton-on-Trent he was Padre to the Toc H. Quiet, unassuming but friendly, he was highly and widely respected both within and without the Church, known to be a man of great integrity. Conscientious and sympathetic, yet having a keen sense of humour, he lived for his ministry and served for the glory of God, and will be especially remembered for outstanding pastoral work. After his removal to Arnside he continued to preach in the circuit, until in recent years failing health prevented his doing so. He died suddenly and peacefully in Arnside on 28 March 1968, in the eighty-fifth year of his age and the fifty-eighth of his ministry.

Arthur was born in 1883 at Hadfield, Derbyshire, to mother Emma, a cotton weaver. Emma married Thomas Hickey the following year.

The 1901 census records Arthur working as a postal clerk and telegraphist before he entered the ministry.