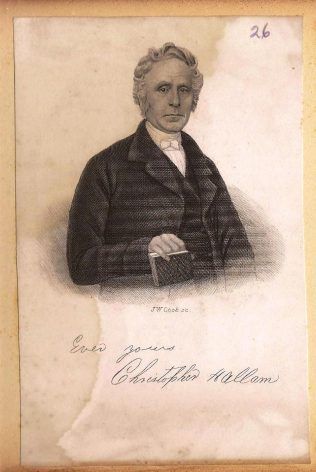 Christopher was born on 24 January 1808 at Kettlewell, Yorkshire.

When he first started to travel, Christopher was the second minister to be appointed to New Mills. In 1839 he was posted to North Shields and started to travel by coach with his wife and baby daughter. They became stranded with no money and Christopher had to leave his family and walk into Bradford to borrow money to complete the journey.

Mary was also a preacher and they became an effective partnership. She frequently preached at anniversary services in the New Mills area up until 1860. They were fondly remembered in the Hexham circuit where they were posted in 1840.

It was in Scotland where they arguably made their most significant contribution. In 1846 in Edinburgh, Christopher arranged for his wife to preach every Sunday evening. In strict, Presbyterian Edinburgh, a woman preacher was a ’scandal’, but curiosity brought out large crowds to listen, and the work prospered.

In Glasgow a year later, the family found themselves in a dire situation with very poor accommodation, having virtually no money and a very weak society. Once again the preaching of Mary revived the situation.

Christopher married Mary Hadfield of Anderson House, Rowarth, nr New Mills on 10 December 1837 at Haslingden. She was born on 1 July 1812 and died on 24 December 1868. Mary was from a strict church family and married Christopher against her parent’s wishes. She later saw them become active Congregationalists. Christopher and Mary had at least one child die in infancy. Three children are identified on census returns.

J Petty, The History of the Primitive Methodist Connexion, 1880, p468