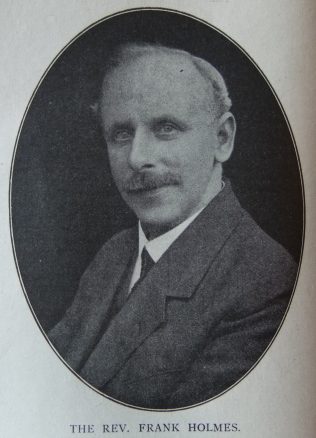 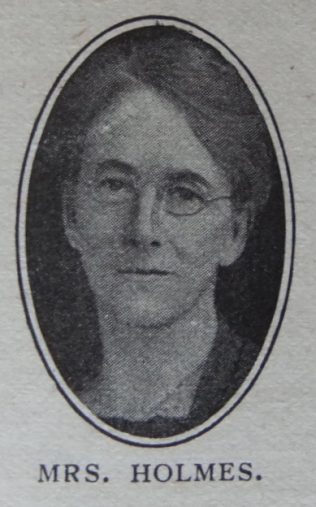 Frank was born in 1870 at Farnworth, nr Bolton, Lancashire, to parents Miles and Mary. His parents were Wesleyan, with his father being a local preacher in wide demand. Miles worked as a joiner and builder.

In 1876, the family moved to Southport and Holmes, senior, became one of the band of workers who commenced a mission that developed into Cemetery Road Church in the Southport II circuit.

Frank stepped into the circle of Primitive Methodism through the school at Cemetery Road. He entered Hartley College in 1892.

Frank worked as a printer compositor before entering the ministry.

Frank was a winsome personality, full of charm. His gifts of heart and mind made him beloved and trusted by all who knew him. His ministry had the teaching note but with evangelical fervour and outlook.

Frank was a member of the Candidates’ Examining Committee, and also served as one of the Oral Examiners. He was also a member of the General Missionary Committee. Frank became Secretary of the Ministerial Candidates Committee and was Vice Principal at Hartley College.

English Literature was his hobby. During his term at Hull, Frank was a member of the Hull Literary Club. He was particularly knowledgeable on Wordsworth literature and gave two lectures on the subject.

His obituary records that he was, above all, a devoted circuit minister, loved and trusted by his people. They knew him as a thoughtful preacher who challenged them in the pulpit, and as an understanding friend in their homes.

Note: The birth record for Eric gives his name as Eric Leighton Holmes. The 1911 Census records him as Eric Limon Holmes.