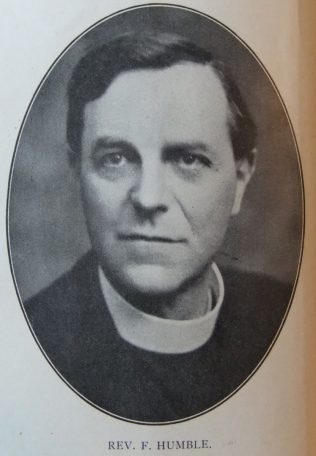 Frederick was born in 1875 at Heathery Cleugh, nr Stanhope, Co. Durham to parents George and Elizabeth. George, an engineman (1881) died when Frederick was aged nine.

Frederick began work as a lead miner at the age of twelve.

Frederick served as Secretary of the Manchester District for five years. He served for many years on the management committee of the PM Preachers’ Friendly Society, and was its treasurer for four years.

His obituary records that sharing the hard and rugged life of the dales people, he brought to his work as a minister wide and practical experience, broad and generous sympathies, a strong constitution and a vigorous and forceful character. In fervent and resonant tone and with confidence and conviction, he preached the Christian faith. His emphasis in preaching was expository and evangelical.

In 1940, Frederick retired to Conway, where for six years he took charge of the St. John’s English Methodist Church, and after that he lived in Colwyn Bay.