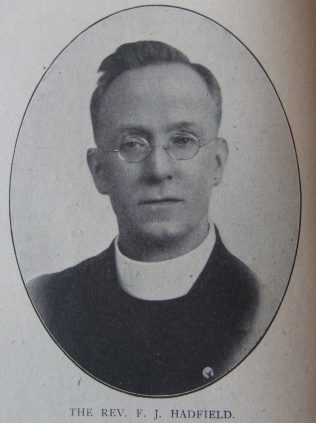 Frederick was born on 8 May 1867 at Glastonbury, Somerset, to parents Isaac Hadfield and Alice Yeo. Isaac, was a PM Minister.

Frederick was at first intended for the scholastic profession, but preferring home companionship to lodgings, he accompanied his parents to Crowle, and became a chemist. His decision for Christ was made at Crowle during a mission conducted by Mrs E. J. Devenish. Whilst managing a chemist’s business as Lincoln, Rev George Ralph Dodd Austin gave him the Church’s call to the ministry.

Frederick only spent a few weeks on his first station at Canterbury. The G.M.C. transferred him to Belfast on ‘sick duty’.

Four building schemes were carried through at Kingsley and Frodsham, one requiring the bed of a brook to be diverted, a task he carried out himself.

Frederick served as Building Secretary in the North British (Scotland) and Leeds Districts.

In Frederick’s obituary, Rev R. W. Callin wrote: ‘He was a fresh and interesting preacher, evangelical and earnest, giving the very best of heart and brain to the work he loved. He had a genuine gift of humour, considerable acquaintance with music and was a real lover of good pictures. Blest with the historical imagination, he delighted in things that were old and precious. As a circuit minister he was most conscientious. The welfare of the Church and of the Kingdom was in literal fact a very burden upon his heart. Our friend, through difficult days and secret suffering, did a great day’s work for his Master.’

Frederick married Mary Davey (1872-1919) in the summer of 1897 at Louth, Lincolnshire. Census returns identify one child.