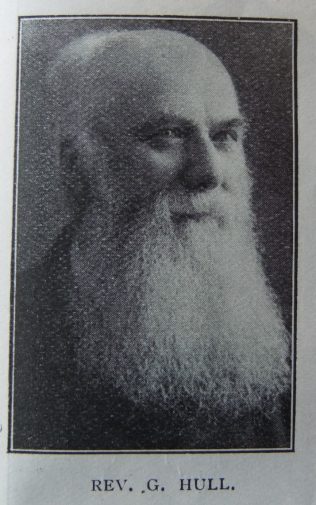 George was born on 6 October 1837 at Wootton, Oxfordshire, to parents Thomas and Silence. Thomas worked the land.

George worked the land before entering the ministry. His obituary records that he lived a ‘careless life’ until he was nearly twenty years of age, when he surrendered himself to the Lord at some revival services held at the chapel in his native village. He was soon received by the Witney Circuit as a local preacher

Before being stationed at Bedford, George was sent to Saffron Walden, then an exceedingly wide circuit. He often had to walk 100 miles per week and conduct eight preaching services as well as attending to other meetings.

George remained in the active ministry for 45 years. He was not greatly interested in the business side of church life or Connexional Committees, but being endowed with unusual intellectual gifts, he gloried in proclaiming a full and rich evangel, and bent all his energies to win a verdict for his Master. His ministry was, therefore, used of God in effecting some remarkable conversions.

George was a hard worker, tireless and indefatigable, in seeking to promote the welfare of the churches in his charge. Following ‘retirement’ in 1905, he settled in Hungerford. There he continued to be intensely interested in the work of the Church, and attended the means of grace whenever he could. He was, too, most generous in his support of the various funds.