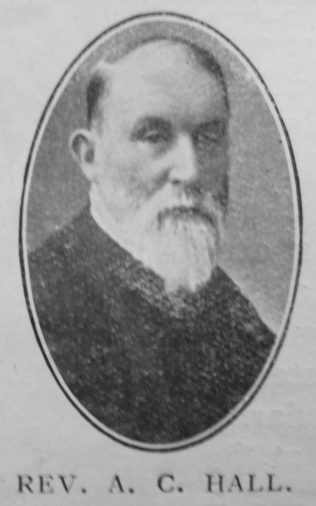 Transcription of obituary published in the Primitive Methodist Magazine.

Our ministry has been rich in men of varied gifts and graces. Our brother’s outstanding quality was his goodness. He might not be termed great or brilliant, but he was a good man, and full of the Holy Ghost. He was born in Hull, November 10, 1841. His grandmother was one of the earliest Primitive Methodists in that city, and was a member of the class led by the venerable W. Clowes. To that class his grandmother took him regularly by the hand. He became a member of West Street, and at the age of sixteen he received a note to take appointments and become a local preacher.

When about twenty-three years of age he was asked to supply Wakefield, in the place of Rev. Jeremiah Dodsworth, who was ill, and some six months subsequently died. It was while at Wakefield that he was recommended for the regular ministry, and was pledged by the Castleford Circuit in 1864. In this district he served his probation, and by his gifts, graces, and fruits gave full proof of his ministry that his call by the Church was sealed by the Holy Spirit. He was received into the full ministry at the Otley District Meeting, in company with Revs. Rumfit and A. Hebblethwaite.

After a year each in Wakefield and Keithley, he went into the Eastern Counties, where many years of his ministry were spent. He was in no sense a Connexional man, attending committees, recording minutes, taking a prominent part in Synods and in Conferences were not in his line. But in preaching the Gospel, visiting the sick, missioning in the open air, these were his delight, and in this way he did his greatest work and won his noblest triumphs.

About seven years ago, through failing health, he was compelled to seek superannuation. He went to Dore, in the Sheffield IX. Circuit, to which society he rendered useful service. Later he settled at Abbeydale, giving what service he was able in preaching and visiting. Suddenly, on February 19th, about mid-night, he was seized with heart failure, and passed peacefully away. The funeral service was conducted in our Dore Chapel, in which Rev. E. Mather, Rev. Charles Dudley, and T. Bullock took part. Memorial services were conducted in Abbeydale and Dore chapels, when suitable reference was made to the life and character of our brother.

Alfred was born on 10 November 1841 at Hull, Yorkshire, to parents Charles Douglas Hall and Mary Ann. He was baptised on 29 March 1842 at Holy Trinity, Hull.

He married Martha Dewhirst (1834-1917) in the summer of 1868 at Halifax, Yorkshire. Census returns identify five children.