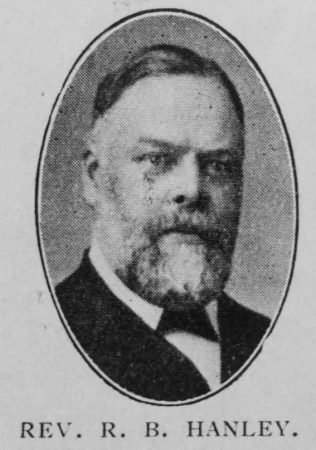 On Monday, June 1st, 1914, the Rev. R.B. Hanley died at Haltwhistle in the fifty-first year of his age and the twentyseventh of his ministry. He was born at New Close Farm, Carlton, near Middleham, in September, 1863. When he was a child the family removed to the Nidd Valley, where he attended schools at Ramsgill and Lofthouse. When ten years of age his father died, leaving a family of six children, making it necessary for him to commence work to help in the maintenance of his brothers and sisters. He was employed principally in agricultural pursuits. When seventeen or eighteen years of age the turning point in his life took place by his conversion at a Wesleyan Chapel at Greenhow Village, but he became a member of the Primitive Methodist Church, Thornthwaites, which was nearer his home and more convenient for him to attend.

In a year from his conversion his name was placed upon the circuit plan as a local preacher, and in this capacity he laboured hard and rendered good service, his labours being in frequent demand. For a period he acted as a hired local preacher in the Pateley Bridge and Pudsey Circuit and also in Oxfordshire. Being of an evangelistic turn of mind, he conducted a number of missions, and had the joy of seeing a number of conversions. Being recommended for the ministry, he entered Hartley College, where he spent one brief year and managed to meet all his expenses, having saved sufficient money out of his own hard earnings.

His first station was Maryport, where he remained three years, after which he travelled at Longton, Scotter, Shotley Bridge, Amble, Hexham, Horncastle, Brough and Haltwhistle. In all his stations he enjoyed a fair amount of success, but the work done at Kirkby Stephen in the Brough Circuit during a term of seven years will ever stand out the most prominently in his ministry. There was a huge and crushing debt which the church could not carry, and which seemed likely to prove a serious problem, but he courageously grappled with the difficulty, and with the help of friends managed to reduce the liability to workable proportions.

When he entered the Haltwhistle Circuit nearly two years ago he threw himself into the work with great zeal, and was winning his way into the hearts of all sections of the community when his health began to show signs of failing, and he was compelled to give up his toil. He was laid aside from active work for about five months, but continued to take an intense interest in all that concerned the welfare of the church. He was exceedingly anxious that he might resume his labours as soon as possible, but that was not to be. After securing the best medical advice possible, and being carefully nursed by a devoted wife, he passed away somewhat suddenly.

During the affliction of our departed friend, whilst he was anxious to recover and resume his toil, his faith in God never wavered, and no doubt ever found expression in his utterances as to his salvation. His feet were firmly placed and his confidence permanently centred in Christ. The gospel he had preached to others was his strength and hope in his last. days. He loved the work of the ministry with a passionate love, and lived to spread the truth. No duty was too arduous and no toil too taxing that he might serve the church. He simply revelled in work for the Master, giving all his time and strength to further the interests of Christ’s kingdom. As District Building Committee Secretary he rendered excellent service by his sound judgment and wise counsels. To this department he gave of his best, and made a special study of the work assigned him. Nothing was done hastily, and the smallest detail received careful attention.

He has left a sorrowing widow to mourn the loss sustained, and a multitude of friends who will revere his memory because of the work done.

Robert was born in September 1863 at Carlton, Coverdale, Yorkshire, to parents  John Wilson Hanley, a farmer, and Ann.

Robert worked as a farm servant before entering the ministry (1881).