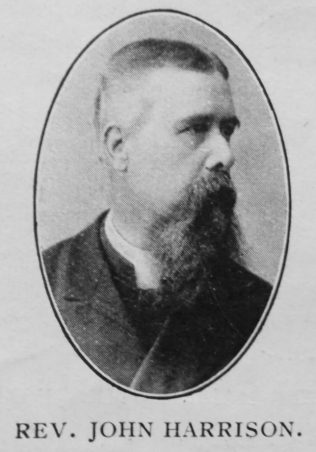 The Rev. John Harrison was born at Melbourne, Yorkshire, on March 24th, 1843, and was educated at the East Cotingwith and Melbourne private schools. His earliest religious impressions were the common fruits of a nominal adherence to the practices of the Anglican Church, but at the age of 15 years he came under the influence of Primitive Methodism, decided to serve the Lord fully, and became a regular member of our Church. He received his first-class ticket as a member on trial from the Rev. Jacob Wilson.

His special gifts were speedily recognised, and at the age of 16 he was appointed by the Pocklington Circuit Quarterly Meeting to speak in public. For five years he laboured as a local preacher with considerable success, so much so that the Rev. William Harland felt that he was intended for a higher sphere of service, and called him into the regular ministry in January, 1864, at the age of 21.

The Conference of that year appointed him to the Gainsborough Circuit, with Mr. Harland as his first tutor and superintendent. During the four years of his probation he also served under the superintendency, and enjoyed the guidance and tuition, of the Revs. J. Calvin and D. Ingham, of whom he possessed the most grateful and precious memories. Having passed successfully all the examinations, and satisfied the examiners of his fitness for the work of the ministry, he was received into the approved list by the Conference of 1868. His ordination charge was delivered by the saintly George Lamb, in Clowes Chapel, Hull.

The Conference of this year appointed him to the Driffield Circuit, and thither he took his young bride, Miss Hannah Langham, daughter of the Rev. Robert Langham, so well known and highly respected in the Hull District. Mrs. Harrison has proved a true helpmate and capable minister’s wife, sympathising with and rendering valuable assistance to her husband in all his undertakings.

Mr. Harrison himself was a descendant of the late Rev. William Prowde, Rector of Oak, Somerset. During a ministry of 31 years, spent in Hull, Norwich, London I., and Brinkworth Districts, he has laboured on some of the largest and most difficult circuits in the Connexion with a goodly measure of success. Chapels and schools have been erected, and many additions have been made to the churches of such as were saved. One notices from his Journal that there was quite a large ingathering during his stay at Epworth, and he never had a decrease of members on any one of his circuits.

His aim was to preach the Gospel which had been “the power of God” to his salvation, the evangelical faith of the fathers of our Church, faithfully and on every occasion. He was a careful student of Methodist theology, history, and general literature, and had made himself fairly well acquainted with the languages in which the Bible was written originally. One of his acquisitions, and a great hobby, was music, in which he possessed quite a proficiency.

Owing to failing health Mr. Harrison was superannuated in 1898, and came to reside at Selby, where he identified himself with the life of the Church, and, as opportunity and health afforded, rendered valuable service. The quarter before his final illness he had four appointments in the country, and he was unceasing in his attention to his Thursday evening class. He loved to talk of the old times and the work of the Church.

His last illness was lingering, but his chief regret was that he could not get to the services of God’s house. The end came on May 6th. The funeral service was conducted in the Selby Church on May 8th, when an address was given by the Rev. R.W. Keightley, who represented the District and Central Committees. Our sympathies and prayers go out to the life-long partner who survives, that the “little while,” the eventide, may be sustained by the Divine presence and peace and the hope of the day dawn and fleeing shadows.

“Servant of Christ, well done!
Praise be thy new employ:
And while eternal ages run,
Rest in thy Saviour’s joy.”

John was born on 24 March 1843 at Melbourne, Yorkshire, to parents William, a tailor, and Margaret.

Before entering the ministry John worked the land.

He married Hannah Langham (abt1841-1919) in the summer of 1868 at Hull, Yorkshire. Hannah was the daughter of Rev. Robert Langham. Census returns identify one child.