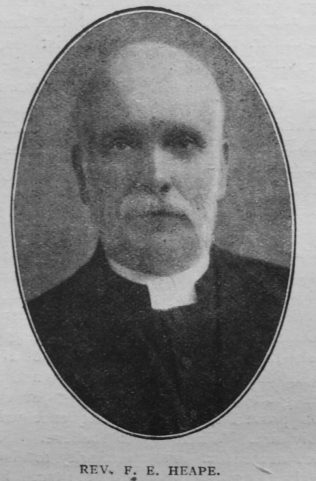 Transcription of obituary published in the Primitive Methodist Magazine by F.H. Edwards

The ministry of Frederick Etherington Heape was of a very unusual character in many ways. He was never content to follow the well-worn paths of established habit and custom. He was an unusual man, and he did unusual things. He had a passion for music. When a boy in his native village of Woodville (Derbyshire) — where he. was born in June, 1844 — he learned to play the harmonium, and at the same time discovered that he had the gift of song. Therein lay the peculiar character which his ministry was to assume. In after years Frederick Heape, seated at his harmonium, held multitudes spellbound by his magnificent singing of the songs of Zion. His ministry was essentially a singing ministry. He was first of all an evangelist, and many were brought into the Kingdom under the influence of his song.

His appearance was equally arresting. Tall and well-built, his face was indicative of a strong personality, albeit his eyes twinkled with a kindly light, that declared a tender compassion and an over-flowing love. He was a true friend, a willing helper, generous in thought and deed, and ever ready to encourage and inspire.

It was well for our Church that he entered her ministry. Religion was the central fact of his life from his earliest days. After serving his time in the Pottery trade at Swadlincote, he removed to Liverpool, where he associated himself with the Mission Hall and at once found his place at the harmonium. Though long years have intervened, there still remain a few who remember the crowds that gathered to hear the gospel message as played and sung both in the Mission Hall and in the open air by this young enthusiast. We do not wonder that his evangelistic fervour and strong personality, with its unique gifts, so impressed the authorities of Liverpool III. Circuit, that he was persuaded to give himself to the work of the ministry.

After a term at the Sunderland Institute, he spent his probation at Hornsea and Louth, subsequently travelling at Filey, Bridlington, Lincoln, Alford, Derby, London (Holloway), Doncaster, Buxton, Sowerby Bridge and Bradford IV. At the Sunderland Conference, 1890, Mr. Heape was specially invited to undertake the ministry of the Central Church, Derby, which at that time was in a very critical condition. He accepted the task, and experienced considerable success in a difficult enterprise. At the Leeds Conference, 1898, he sang the songs of Zion at the memorable service in the Coliseum conducted by the Rev. James Flanagan.

He was a revivalist, first and foremost, and as such was in constant demand in all parts of the country. At the Mow Cop Centenary Gathering, 1907, he used his peculiar talents with marked effect as he led the great love-feast with which the day’s services closed. Men called him “the Sankey of Methodism,” and they were not mistaken.

An accident at Bradford in 1908 compelled him to retire from the active ministry after thirty-six years of service, and he returned to Bridlington. Although public work was impossible to him, Mr. Heape continued to exercise a wonderful influence on all with whom he came into contact. And it is no small token of the high regard in which he was held that, at his decease, the flags of the rival political parties were set at half-mast in tribute to his memory.

The end came very gradually and peacefully. He knew no pain, and only for a few days before he passed within the veil was he, through weakness, completely laid aside.

On Thursday evening November 23rd, 1922, in his seventy-eighth year, Frederick Heape entered the Homeland. He had done a good day’s work. He had not spared the talents God had given him. Many are deeply grateful for his life and influence.

The funeral took place on Monday, November 27th, 1922. The service was conducted by the Rev. F.H. Edwards in the St. John Church, assisted by the Revs. C.T. Bishell, T. Cook (Hull), E. Dalton, D.D. (representing the General Committee), W. Conrad Balmer (U.M.), and T. Seaton Davies (Wesleyan). Dr. Dalton gave a beautiful testimony to his sterling character and faithful service as a minister of the gospel.

His widow, two sons and two daughters, revere the memory of a husband and father of whom they were justly proud.

Frederick was born on 22 June 1844 at Woodville, Swadlincote, Derbyshire, to parents Robert, a crate maker, and Martha.

Before entering the ministry Frederick worked as a bookseller.

He married Emma Ann Codd (1850-1897) in the summer of 1877 in the Louth Registration District, Lincolnshire. Census returns identify five children.

He married Catherine Foster (1850-1930) in late 1898 in the Scarborough Registration District, Yorkshire.

Note: Many records spell the surname as Heap.