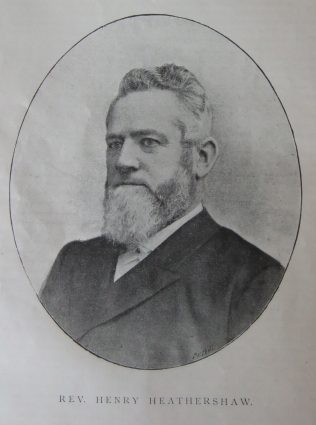 Henry was born in 1833 at Douglas, Isle of Man, to parents Joseph and Mary. The family moved to Jersey when Henry was an infant. Joseph was a labourer working in Jersey in 1841.

Henry had seven years of his boyhood attending  ‘ordinary’ school. He attended a Sunday School connected with the Church of England. Henry was converted through the Primitive Methodists when he was 17. He became a Sunday School teacher and local preacher.

In 1851 Henry was working in Jersey as a brick maker. He declined an opportunity to go into the ministry and, instead, emigrated to Victoria, Australia in 1854. In 1860, he was again pressed to enter the ministry and this time he accepted.

Henry had only eight stations in the 33 years up to 1894, which speaks of the regard in which he was held. He was regarded by his colleagues, and the people, as one of the best preachers of the denomination within the colonies. He was twice President of the Australian Conference.

He was ever genial, thoroughly fraternal, constantly hospitable, everywhere catholic, and therefore was in very good repute not only among his own denomination but among ministers and the people of other churches.

Henry was Editor of the ‘Victorian Primitive Methodist’ for five years. He was the recognised head of the denomination in dealings with government. Henry was also Grand Chaplain of the Orange Order.