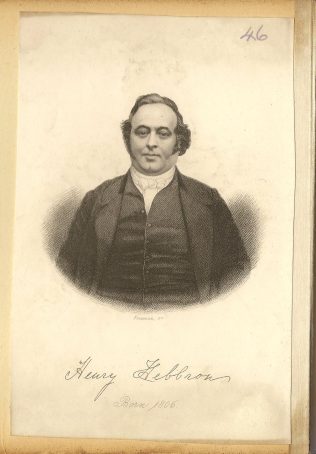 Henry was born in June 1806 at Potto, North Yorkshire. He was baptised at Whorlton on 27 June 1806. He father was also called Henry. Kendall comments that he was a gentleman by birth. Henry was converted through the preaching of William Clowes in his father’s barn at Potto, whilst Clowes was a mission to the North Riding in the summer of 1820.

Ritson describes Henry as a very popular preacher in Northern Primitive Methodism. His striking characteristics were mental fertility, imagination, wit and humour. His oratory style was simple, terse, vigorous, idiomatic, and everything artificial was resolutely eschewed. Henry had the ability to draw illustrations almost exclusively from the ordinary scenes of social and domestic life.

Barber relates that Henry’s sermons and speeches ‘gushed forth spontaneously, like mountain springs’.

Henry was also a man of immense bulk – towards the end of his active ministry he weighed some twenty stones.

Henry married Elizabeth, daughter of John and Elizabeth Ridley on 12 August 1831 at Tynemouth. She was born on 23 March 1803 at Hexham and died on 24 June 1863. The Ridley family were Congregationalist, but Elizabeth was induced to attend a PM sermon where William Garner preached. As a result she had her conversion experience. Elizabeth became engaged to William Garner, but her friends, disapproving of the match, conspired to break the relationship.

Henry died on 18 Aug 1860 in Hexham. After Henry died, Elizabeth followed his wishes by building a PM chapel in his memory at Hexham. On the day the chapel was due to open, Elizabeth died and she was buried next to Henry in Hexham cemetery.