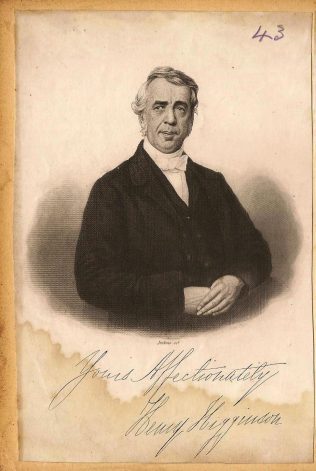 Henry was born on 19 August 1805 at Pendeford Mills, Staffordshire. He was educated at Brewood Grammar School. His father, John Higginson, was a farmer and miller.

Higginson was popularly known as ‘Six feet of Eccentricity’ and as ‘The Roving Ranter’.

One of his first missions was to the Gower in March 1834. It is recorded that he used the Murton Wesleyan Chapel, which had fallen into disrepair as one of his preaching bases. A diary of that mission was published in the PM magazine in 1835.

Henry was sent to mission Luton and Dunstable in 1839 from the Shefford circuit, along with Samuel Turner. They opened their mission at Houghton Regis on 21 April, gathering a crowd by singing in the streets. The work in Luton prospered and by 14 November a chapel was opened in the most needy part of town. Henry’s work in Luton was cut short by a fever caught through visiting some sick persons.

When he had recovered, he was sent to Marlborough and within a year the mission was set up as a separate circuit with two travelling preachers and 276 members.

Henry was a noted hymn writer amongst the Primitive Methodists, often using popular tunes of the day. Ritson tells the story of Henry on his way to a tea meeting at Walsall hearing a lad singing a tune which caught the preacher’s fancy. The lad was induced, on the promise of a penny to sing it over again. At the close of the rehearsal, Henry handed over the penny with the significant remark: ‘I’ve got the tune and the devil can take the words’.

H B Kendall, Origin and History of the PM Church, vol 2, p32