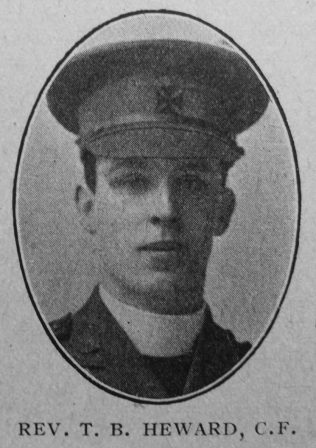 THOMAS BROWN HEWARD: born at Stockton-on-Tees in 1880. He was accepted as a candidate for the Primitive Methodist ministry in 1901, and at Hartley College he came under the influence of Dr. A.S. Peake of whom he continued to speak gratefully to the end of his long life.

He served at Leeds I, Beverley, Brigg, and Richmond before volunteering as an army chaplain in 1916. After service in Egypt and Salonica he was appointed Senior Chaplain to the 18th Division in France and was wounded just before the armistice. The remaining twenty-five years of his active ministry were spent in three circuits: Matlock, Cambridge and Watford. Each of these appointments presented a special challenge to which he responded with great enthusiasm and success. Matlock was a popular resort and his Matlock Bank congregation was augmented on most Sundays by large numbers of visitors. At Cambridge he was minister of Castle Street church which was then responsible for ministering to Primitive Methodist undergraduates. The manse was a second home for scores of young men and women from all parts of the country. In spite of the pressure of work as superintendent of a large circuit he zealously carried out all the extra duties of university chaplaincy with unfailing cheerfulness. At Watford, during the Second World War, his previous experience in the army was of great value. Large numbers of soldiers were stationed in the area and to many of them he was a friend whose robust faith and constant concern for their welfare helped them to feel at home in a strange place.

In 1946 he and his wife, whose own great gifts had been brought to the service of all their churches, retired to Cambridge. Their ministry continued in retirement and their home was a place where many, including ministers, found affection and understanding. The closing years of his life, after his wife’s death, were spent in the home of his daughter in Richmond, Surrey. He died on 31 August 1969, in the ninetieth year of his age and the sixty-seventh of his ministry.

Thomas was born in 1880 at Stockton on Tees, Co. Durham, to parents William Hewitt, a telegraph lineman (1891), and Martha Ann Brown.

Before entering the ministry, Thomas worked as a railway forwarding clerk (1901).

Thomas died on 3 August 1969 in the Midhurst Registration District, Sussex.