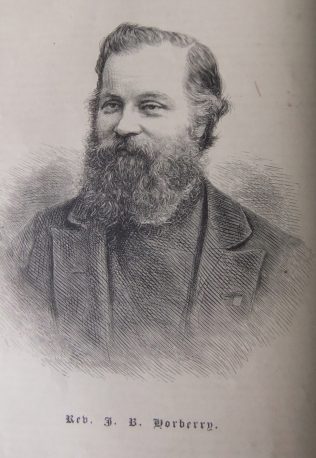 James was born on 20 December 1834 at Kexby, Lincolnshire to parents William Horberry and Rebecca Baines. William was a tailor. In 1851 James is working as a tailor’s apprentice.

James was converted aged 12. He started to preach when he was 14. Both his parents were converted through his ministry.

In his final circuit James found large numbers added to the church and two handsome and commodious chapels were erected.

His obituary records that as a colleague James was kind and considerate, and agreeable in the treatment of his brethren. As a preacher he always endeavoured to preach the truth of the Holy Scriptures faithfully and conscientiously, and shunned not to declare the whole counsel of God. The doctrines he preached were evangelical and Methodistic; a prominent feature of his teaching being that of ‘sanctification by the Holy Spirit’, on which he wrote and issued some useful publications.

His pastoral visits were much appreciated and have left his name a fragrant memory. In the matter of ‘total abstinence’, he was an example to be safely followed.

Religious consecration essential to holiness; or, the believer directed to the attainment of entire sanctification , 1868

Heaven on earth: or, the high privilege of every Christian to be sanctified wholly; to which is appended Rules for holy living , 1882

James died on 31 March 1888 at Burton on Trent, Staffordshire.