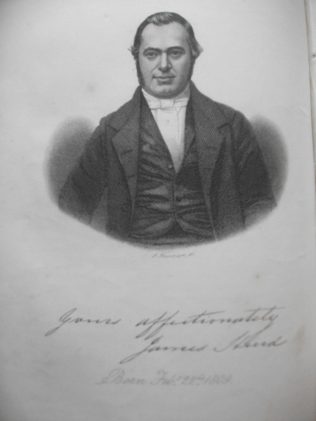 James was born on 22 February 1809 at Frome, Somerset to parents Jacob and Elizabeth. He was baptised on 6 November 1814 at Zion Independent Chapel, Frome. James was converted in 1825.

James was engaged in missionary activities at Marlborough, Wiltshire, in 1832/3 for the Shefford circuit. Other preachers active in the circuit included Thomas Russell and William Wiltshire. Membership of the Shefford circuit was reported as 1,010 in March 1833, an increase of 300 on the previous year.

In the period 1834/5, the Burland circuit sent James on missionary work to Northampton. He succeeded in forming a few societies in the villages around Northampton.

His obituary records that in total there was an increase of 2423 on his stations during his itinerant ministry.

In retirement, ‘he gave good counsel, prayed very earnestly, and freely helped the poor and needy in their difficulties.’ Rev W Marwood is quoted as saying; ‘He was the best family visitor he ever knew.’