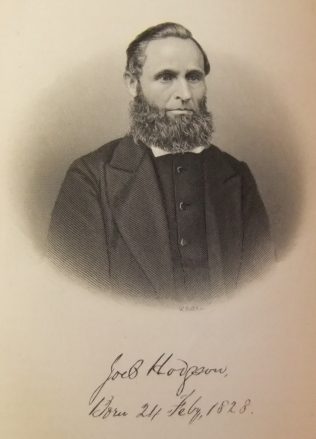 Joel was converted amongst the Primitive Methodists and started to speak publically at the age of 12 with the sanction of the Circuit Quarterly Meeting. During the next seven years, Joel visited different parts of the connexion preaching at special services. This took a toll on his health, particularly in later life.

The Sunday School Magazine, 1841, records that Joel preached two sermons at Oldham on 23 October when aged under 14. The admission was by shilling tickets.

Joel had to take time out between 1859 and 1862 due to health issues. He was appointed to superintendency on two occasions. Each time he had to resign because he found the role too great a strain on his health.

The PM magazine of 1877 records; ‘His sermons, which are evangelical in doctrine, and chaste in diction, are comprehensive expositions of Scriptural Truth; and while not unacceptable to ordinary hearers, they especially commend themselves to the judgement of the more intelligent of his congregations.’

His obituary records that his preaching always showed careful preparation, wide reading and deep insight into truth. He was well loved by the people. His visiting was full and accurate, none were missed.

His was not a ministry of chapel building!