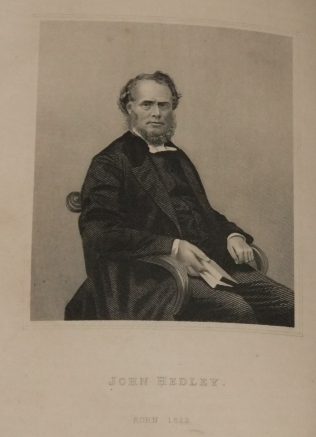 John was born on 7 April 1811 at Acomb, Northumberland. At the age of 12, John was deeply convinced of his sin under the Primitive Methodists. However he moved from Acomb to learn a trade and his faith lost ground. He was later converted through the Wesleyans and became an exhorter and local preacher. On moving again, John reunited with the Primitive Methodists and was a succesful and ‘much in demand’ local preacher in the Hexham circuit.

In 1838, R J Shafto Esq of Bavington Hall engaged John as a home missionary and sent him to mission in Scotland. He joined the itinerant ministry the following year.

Rev J Milner writes; ‘He wielded great influence in prayer. As a preacher he was earnest, simple, clear, and forcible, confining himself to the elimentary or cardinal doctrines of the cross.’

He married Elizabeth Wardman (1817-1877) in 1843 at Knaresborough. Census returns identify one child.