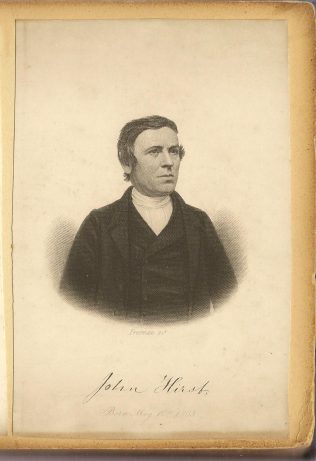 John was born on 11 May 1803 at Barwick in Elmet, Yorkshire to parents, James and Mary. He was baptised on 12 June 1803. He was converted at the age of eighteen and was a Local Preacher for four years before he became a travelling preacher in 1823.

John married Ann Hopkinson Howson on 13 June 1831at St Peter, Leeds. She was born 11 June 1809 and died on 10 June 1890. Ann belonged to a Quaker family, the Howsons of Darlington. She became associated with the primitive Methodists in her teens, which caused her bitter persecution from within her family. The family were bitterly opposed to her match with John, to the point where they imprisoned her in her own home for six weeks. She escaped through the cellar grate and took the stage coach to Leeds, via York, to meet up with John. From Hull, in 1831, John and Ann went to Nenthead in Northumberland. One week, when John was trapped away from home by a snow storm, rather than abandon a service Ann read a sermon and then began to expound herself. She was soon put on the plan and became a very popular ‘special’ preacher. She preached for over 60 years.

John and Ann had nine children.