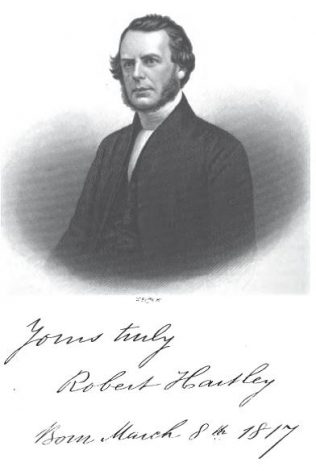 Robert was born on 8 March 1817 at Trawden, Lancashire. He was the son of a schoolmaster.

After 25 years as a travelling preacher across the England and the Channel Islands, Robert and his family sailed to Australia on 25 February 1860, arriving on 20 June.

In January 1864 he preached the first sermon at the opening of the Rockhampton PM Church.

He was a founding member of the Rockhampton Benevolent Society (1866) and played a leading role during decades of non-government welfare for the socially deprived.

Hartley held office in several non-denominational organisations, but it was the Temperance Society which received his staunchest advocacy. Within two weeks of his death in 1892, a public meeting decided that a drinking fountain would be a most appropriate tribute. A century later this handsome memorial carved in local sandstone, and spouting pure water, still stands beside the Rockhampton GPO.

He was the first president of the Queensland  conference in 1890.

Robert was an uncle of Sir William Hartley. He died on 25 May 1892 in Rockhampton, Queensland, Australia.