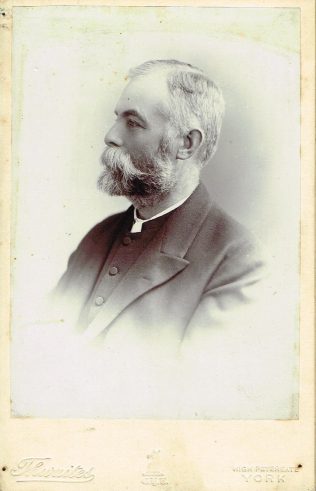 Born at Nenthead, Alston Moor, Cumberland, high up among the Pennine Hills, on 21 December 1851, the son of Joseph and Hannah Hind. Robert’s mother died when he was a young child.   He was physically strong, and starting work as a lead ore smelter like his father, by the time he was 15 he was able to do the work of a man.

Although he came from ‘good, wholesome, religious stock’, he experienced a personal conversion during a revival conducted by Miss Bennett of Chester, and at 16 became a local preacher.

He was recommended for the ministry but the death of his father meant he was responsible for his younger sisters, Phyllis and Annie, who came to live with him in his first manse. Once the difficulties were overcome he entered Sunderland Theological Institute, for a year’s training, before taking up his first appointment at Crook, the start of a tremendously fruitful ministry.

In Middlesborough he led a famous revival, during which conversions took place every Sunday for years. He was also a member of the School Board, and the Free Church Council.

He had a remarkable personality which breathed new life into the organisation of the churches, and was a powerful preacher. John Wilson, MP, would travel miles rather than miss one of his weeknight expositions of the Acts of the Apostles.

His administrative skills were also used in the Chapel Aid Association and Insurance Company.

He had a basic education at the village school and became a voracious reader. He loved poetry and fiction, and later contributed articles to the PM Quarterly Review. His stories were also serialised in the PM Magazine, and he co-wrote articles with Joseph Ritson.

After his early death at the age of 58, on 19 February 1909, in Newcastle where he had gone to see a specialist, Emma Jane later married another PM minister, Emerson Phillipson, in the summer of 1918 at Doncaster, Yorkshire.