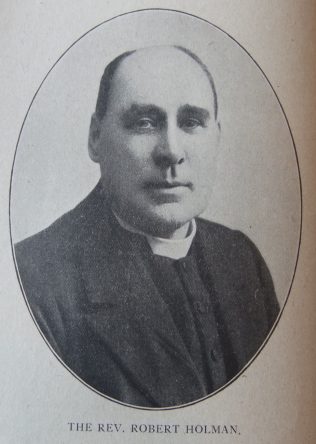 Robert was born in 1867 at Gressenhall, Norfolk. Census returns from 1871 and 1881 suggest that Robert was brought up by his grandparents, George and Elizabeth Holman. George worked the land. Robert was identified as a bricklayer’s labourer in the 1881 census return.

Robert was a typical Norfolk man. Strongly built, broad-shouldered, practical in his outlook, sturdy in his convictions, and resolute in the work he undertook. He was not easily swayed by emotion, nor daunted by difficulties. He liked to think things over, to weigh up the probabilities, to see where the road would lead and then pursue it to the end.

His preaching was of the practical and evangelical type. There was no soaring flights of fancy, though for words he was never at a loss. Words came to him as readily as water to a spring, but they did not shape themselves into flowery speech or oratorical flights, but into plain, earnest, direct appeals to the heart and conscience of his hearers.

Robert entered into superintendency as soon as his probation was completed. He superintended the building of chapels at Wortham, Bressingham, Brightlingsea, and Harold Bridge.