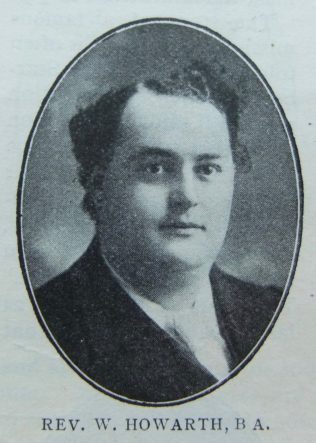 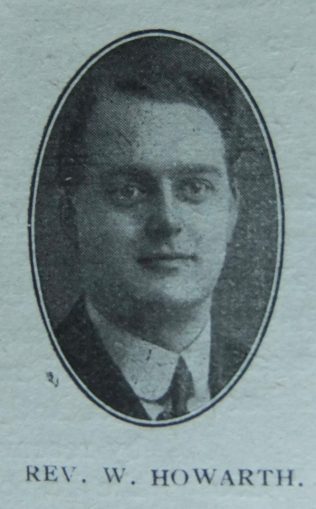 Wilfrid was born in 1884 at Halifax, Yorkshire, to parents Greenwood and Emily. Greenwood was a grocer.

Transcription of Obituary in the Minutes of Conference.

The death of the Rev. Wilfrid Howarth at the early age of forty-two has removed from the ranks of the ministry one of the most able and promising of the younger men.

From boyhood he was linked with the Primitive Methodist Church. His parents were devoted workers at Ebenezer Church, Halifax, and very early Wilfrid showed active interest in that Church’s life. His first work was as Secretary of the Junior Christian Endeavour Society, an office in which his boyish enthusiasm and diligence revealed itself. While yet in his teens he was a local preacher and Sunday School teacher. His heart was in the Church, and it was natural that he should find his vocation in the ministry, a calling for which he was distinctly fitted by qualities of mind and heart.

After preliminary education in Halifax, he went to Silcoates School, taking there that full part in the school’s work and play which is natural to a healthy boy. The success at school led to his going to Manchester University, where he graduated as a B.A. Having been accepted as a candidate for the ministry, he entered Hartley College, and took the Divinity Course at the University. At the College he took advantage not only of the studies provided for, but of that training which comes through the many-sided activity of a student’s life, sharing to the full the work of the different College Societies. He thus became an educated man in the best sense of that term, one with many interests, keen sympathies, and with a personality alive and alert to all that was happening around him.

His first Circuit was Harrogate. Here he spent the four years of his probation. They were happy, successful years, and the Storbeck Church flourished under his care.

From Harrogate he went to Bishop Auckland, where again good work was done, especially among young people, many of whom he stimulated to new interests and activity. Young men with  awakening minds found in him just the guide and helper they needed.

The distinctive work of his ministry, however, was probably done in Darlington, where he served for eight years, first as colleague to the Rev. W. Barton, and then as Superintendent.

The Darlington Circuit, always strong, grew steadily under his ministry, his work as preacher and teacher ranking high. Few men in Darlington better known and more highly respected, and calls came to him for work in many different directions. He was a member of the Darlington Education Committee, did much for the local Free Church Council and Sunday School union, and was constantly being asked to give lectures and addresses, not only for other Churches, but also for various educational organisations. The railway men chose him as their speaker at a number of their anniversary festivals.

In 1924 Mr. Howarth left Darlington for Gateshead I. Circuit, and there for two years he did work which will be remembered for many years to come.

The end came very suddenly. On July 6th, 1926, he went to conduct a service at Joicey road Church,  but was unable to proceed owing to a sudden and sharp attack of pain. A doctor was summoned, and he was taken home, but all efforts to restore him proved unavailing, and he died before midnight. His friends had known for some time he had had to go carefully and had been warned by his physician to avoid undue strain, but none suspected that so suddenly and so soon was he to be taken from them.

The Memorial service was held in Durham Road Church, and was attended by a very large congregation, in which were representatives from all the Circuits on which Mr. Howarth had travelled, and from the different movements and organisations in which he had taken an active part.

The Vicar of Gateshead and all the Free Church Ministers of the town were present, and the respect and esteem in which Mr. Howarth was held by his brethren was evidenced by the fact that nearly every minister from the Darlington and Stockton, and Sunderland and Newcastle Districts also attended.

The service was conducted by the Rev. J. Arthur Smith, assisted by Revs. G. Ayre, G.W. Taylor, J. Gilmour (Presbyterian) and E.B. Holtby. The Rev. W. Younger gave a tenderly appreciative address, in which he paid tribute to the fine quality of Mr. Howarth’s life and ministry.

A widow and one daughter, Dorothy, are left to mourn a loss which is shared by all who knew and loved him, and to know him was to love him, for Wilfrid Howarth inspired affection and friendship.

Had he lived there is no doubt that he would have filled an important place in our Church’s Councils, for he had very distinctive gifts. Modest and somewhat reserved, he never sought recognition for himself, but his very real ability was apparent to all who knew him. He had a well-trained mind, read widely and was a master of what he read. There was about him nothing of the pendant; knowledge was related to life. A skilful debater, resourceful in argument, and quick to see the implications of any situation, he was a worthy champion of many good causes. The Kingdom of God called him into service, and he gave of his strength not only to the Church, but to political and social causes in which the fight for righteousness was involved.

No man could doubt his sincerity. He lived what he preached and his ministry will live for many because it was not only the ministry of speech, but the ministry of a good life. Generosity seemed natural to the man – no mean word, no unchivalrous action could ever be imagined of him. As a colleague he was all that could be desired. Those who were privileged to service with him will never forget the impression made on them by his chivalry, his loyalty, his sincerity, his thoughtfulness. Many are richer for having known him, and the life beyond to them seems more sure, because they cannot associate death with a personality so fine and so lovable.

Wilfird married Lottie Chippindale (b1884) in the summer of 1913 in the Knaresborough Registration District, Yorkshire. Birth records identify one daughter.