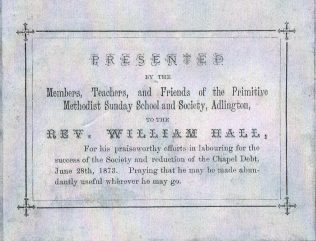 William Hall was born in Ashby de la Zouch, Leicestershire, on 6 September 1845.  He was the son of Joseph Hall, a gardener, and was a young man when he became a Primitive Methodist Minister, and a Local Preacher before that.

His first circuit was at Bury, Lancashire, in 1868. From there he went to Chorley in 1870, where he met his future wife Esther Hannah Barnes, a dressmaker, who was living in Chapel Street. They were married on 15 April 1875 at the Independent Chapel, Hollinshead Street, Chorley.

His widow returned to her home town of Chorley, where she married William Barratt at Ebenezer Primitive Methodist Chapel on 3 June 1885.

Although William did not have a long ministry, he was clearly highly respected, as when he left Chorley circuit in 1870, the members, teachers and friends of the Primitive Methodist Sunday School and Society at Adlington (a village near Chorley), presented him with a set of encyclopedias, ‘For his praiseworthy efforts in labouring for the success of the Society and reduction of the Chapel Debt, June 28th 1870. Praying that he may be made abundantly useful wherever he may go.’

His daughter Esther, who was only 9 months old when he died, treasured this link with her father, as she took them with her all the way to Australia, where his great grand daughter looks after them today.