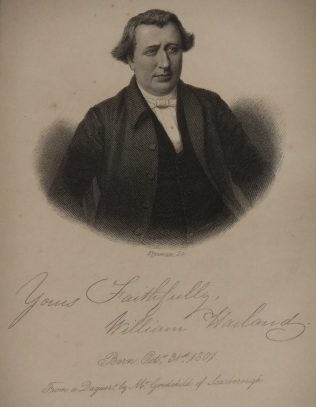 William was born on 1 October 1801 at Newton, nr Pickering, Yorkshire. He was educated by Rev Pudsey, an Anglican clergyman, until 1821.

Kendall writes; ‘From Scarborough Clowes pushed on (in early 1821) for Whitby, but as he passed through Robin Hood’s Bay, the fishermen “got wit” that a “Ranter preacher” was amongst them, and Clowes was fain to preach in three houses opening into one another. This plural place of assembly was packed with people. When, soon after, Clowes paid a return visit to Robin Hood’s Bay, and held a service by preference on the beach, he was assisted by J. Branfoot, and had as one of his hearers William Harland, the young schoolmaster of Stainton Dale, who then and there resolved to lead a Christian life.’

Kendall writes; ‘ William Harland was a native of Newton near Pickering, and was born in 1801. He was educated for a schoolmaster, and hence, from a scholastic point of view, was privileged beyond most of his brethren. Those who came in contact with him were impressed with his amiability no less than with his intelligence. On a subsequent visit to these parts, Mr. Clowes had some conversation with the young schoolmaster, who set him on his way to Cloughton after preaching at Stainton-Dale, and found him to be ” a young man of considerable information and kindness of disposition, and capable of doing much good in his day and generation.” Yet Mr. Harland did not for some time identify himself with the new movement, though he lent his schoolroom for preaching services and duly attended them. At last, however, he made up his mind. Mr. W. Howcroft had given an invitation to all who desired to become members to remain after the service and he would give them a ticket on trial ; whereupon Mr. Harland stepped up to his own desk and asked if the preacher would give him a ticket on trial. “No ; I won’t” ; said Mr. Howcroft, ” but I will give you one as an approved member.” Mr. Harland preached his first sermon at the opening of Newton chapel, which was a converted cart-shed, and he lived to preach the opening services of the chapel subsequently erected in 1850. At the Hull Quarterly Meeting, September 1838, Bro. J. Harrison was appointed ” to consult him respecting his willingness to enter our ministry.” Mr. Harland was willing, and for forty-three years he rendered good service on the platform, where he was at his best, and in the pulpit. He was elected President of the Conference of 1862, and filled the editorial chair from 1857 to 1862. He was made a deed-poll member in 1870, and retained that office till 1879, when growing physical infirmities compelled him to resign.’

Barber writes that William was amongst the most popular pulpit and platform orators of the mid-Victorian era.

William was sent with William Clemitson by the Hull Circuit to mission Portsmouth and the Isle of Wight in the summer of 1834. They had mixed success.

In 1843, Conference appointed William, Superintendent of the London mission, as general superintendent of home missions. This was a new role whose duties were not defined and which continued for one year only!

William’s obituary records that he was very popular with the sailors and fishermen, as he manifested much sympathy with them, was very friendly and addressed them in their mother tongue and seafaring terms.

He was a total abstainer and felt a strong interest in the ‘Band of Hope’. William was Liberal in politics and conservative in church polity.

William died on 10 October 1880 at Barton on Humber, Lincolnshire.