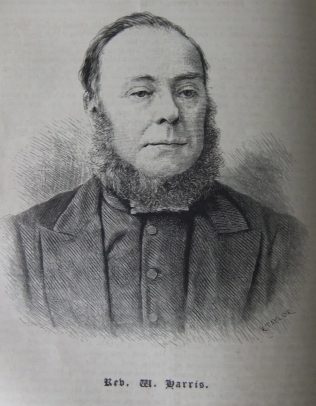 William was born at Rochdale, Lancashire on 16 March 1833 to parents John Harris and Sarah Kershaw. He was baptised 20 May 1837 at Rochdale.

In 1851 William was working as a cotton throstle doffer.

William easily holds the records for service over any minister who has travelled to the Isle of Man.

His obituary records that he has always been a good preacher, and could successfully adapt himself either as a teacher or evangelist as occasion required.

In a quiet but most effective way, William influenced quite a number of young men in the midmost of his ministry, and it is largely to his interest and labour we own the beautiful church in which our people worship at Port St Mary.

He was great in the simple things. He was a fine class leader, and a wonderful conductor of a prayer meeting. But undoubtedly his greatest power was exercised in the homes of the people. Systematic visitation formed the base on which his ministry was built.

Of patient plodding service to the very end, he was an example rarely paralleled.