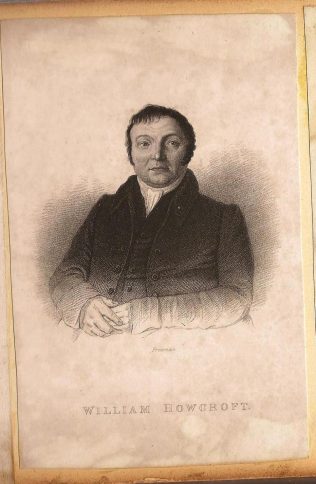 William was born on 22 March 1789 at Hambleton, Yorkshire, to parents Thomas and Mary. William was converted in 1809 at Thornley, through the Wesleyans, where he worked as a farm servant. He apparently ‘back-slided’ until 1814 when there was a further Wesleyan revival in the area. He became a Wesleyan local preacher until 1819 when the Primitive Methodists missioned in his village. William joined with them and became a class leader.

Christ, the Divine Restorer, Or, Source of Life Unto His People: A Sermon, Preached in the Primitive Methodist Chapel, Pontefract, on Sunday Evening, May the 29th, 1831

William was conected with significant revivals in Filey in 1825 and Whitby in 1825.

His obituary records of his preaching; ‘Sometimes his style was sententious and pithy, and the singularity of his smiles would arouse and rivet the attention of his hearers; but at other times his style was wild and capricious, and fanciful producing a feeling not altogheter in keeping with the sobriety of a devotional assembly.’

William’s first marriage in 1814 was to Jane Cox, a widow, daughter of Mr Robert Conkey.

J Petty, The History of the Primitive Methodist Connexion, 1880, p187