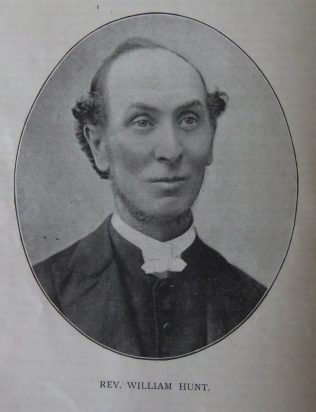 William was born on 22 February 1844 at Corsham, Wiltshire to parents Solomon and Mary. Solomon was a glass and china dealer. Both parents were Primitive Methodists. Mary was a class leader and Solomon a local preacher for nearly 60 years.

William recorded his conversion date as 6 January 1856. He was on the plan aged 16 and entered the ministry aged 18.

Immediately prior to joining the ministry William worked as a student teacher.

William set sail for Australia on Glendower landing at Melbourne on 13 December 1867 with his wife and child.

William was well-educated, a good preacher; devout and deeply imbued with the Sprit of Christ; in sympathetic touch with every movement the tendency of which is to elevate and bless his brother man; a capital man of business, upright, conscientious, tenacious and persistent in what he believed to be right.

The 1895 biography in the Primitive Methodist Magazine records that to that time 10 churches and one parsonage had been built under his superintendency.

Kendall records that William attended the British PM Conference in 1899 as the representative of the Australian Districts in the settlement of the financial questions connected with the proposed Union of Methodist Churches in Australia, which took place in 1902. The ability and courtesy shown by William in the conduct of those delicate negotiations were recognised by a special resolution of the conference.