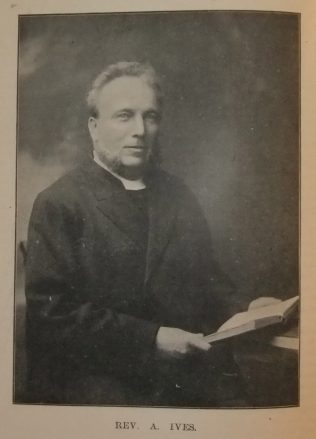 Alfred was born abt 1840 at Northampton, Northamptonshire to parents George Ives and Charlotte Kent. George was a shoemaker.

As a child, Alfred attended the Horse Market Chapel in Northampton. Alfred was converted aged fourteen under the ministry of Rev. James Langham. He immediately became a Sunday School teacher and two years later a local preacher. The superintendent of the circuit, Rev Dennis Kendall, saw his enthusiasm and possibilities and guided him in those developmental years.

Alfred worked as a local preacher for eleven years in the Northampton, Maidenhead and London circuits before entering the ministry. He worked as a bootmaker.

Alfred never attempted to be a great preacher, but succeeded to be a helpful and saving one. He had a fine voice, and it was full of the strength of his convictions and the tenderness of his deep emotions. He spoke as God’s messenger, who has no mere tale to tell, but an experience to declare of the reality of the message of which he was the bearer. He was always the evangelist.

Alfred was always an earnest temperance advocate. He was also among those who organised the first Metropolitan Missionary Meeting.

After superannuation, Alfred lived in Redruth for three years before moving to Weston-super-Mere.