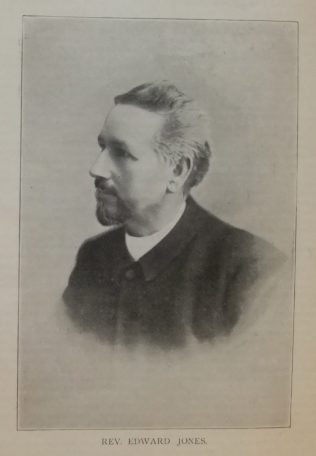 Edward was born on 11 October 1839 at Bishop’s Castle, Shropshire to parents John and Mary. John was a blacksmith. Edward was a third generation Primitive Methodist.

Edward was converted on 15 January 1858 in the Pennerley Chapel at a service conducted by Rev. James Huff. Shortly after his conversion, Edward preached his first sermon to a congregation of villagers assembled in a hill-side cottage. Edward devoted himself to prayer and a course of study and became a useful and successful local preacher.

Edward was recognised as an able and ready ‘penman’ holding many District Secretarial appointments.

His obituary records that Edward was methodical and painstaking; an unflinching disciplinarian, and yet gentlemanly and courteous. He was well-read, he was a lucid, interesting and able preacher of the Word, his platform work and devotion as the shepherd of his people were highly appreciated.

Edward married Emma Siddall (1855-1926) in the summer of 1877 in the Nantwich Registration District. Census returns identify six of seven children.