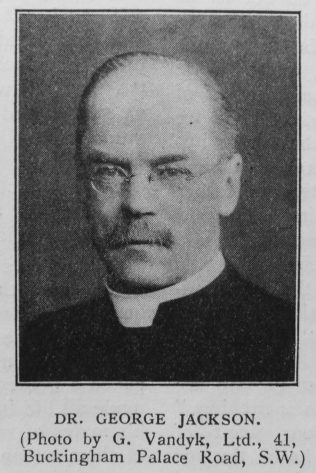 GEORGE JACKSON: born at Keighley on 9th December 1889, grew up in the Primitive Methodist Church there, and went for training to Hartley College in 1913. The First World War meant that in 1915 he was sent to serve in France with the R.A.M.C. After demobilisation in 1919, because of a shortage of ministerial staff, he was sent immediately into circuit, first for two years at Scotter in Lincolnshire and then for two years at Scunthorpe.

On 14th July 1920 he was married to Doris Birchall of Leigh in Lancashire and from 1924 was for three years in that circuit, followed by Tarporley and Great Yarmouth (Temple). In 1936 he began his ministry in the Acle Circuit, where during the Second World War he was responsible for organising a canteen in a disused church building with recreational facilities for members of the Armed Forces billeted in that area. In 1948 he moved to the Aylsham, Briston and Reepham Circuit and in 1952 became Superintendent of the East Suffolk Circuit, residing at Southwold. He became a supernumerary in 1955 and he and his wife went to live at Easton Bavents overlooking the North Sea near to Southwold, to which after twelve years they returned.

He continued to preach on the plan until he was eighty and thereafter still took part in weekday meetings and house groups. He was a constant and wide reader, and until the death in 1978 of his neighbour and friend, Rev. Reginald Cole, the two used to spend a morning of each week in theological reading. Mrs. Jackson was a true companion and helper all their married life. His own health began to fail during 1979, and two periods were spent in hospital. He recovered and was able to attend church again, and he and his wife attended the Covenant Service together at the beginning of 1982.

On 15th January 1982, when they were walking together towards the sea front, he suddenly collapsed and died, in the ninety-third year of his life and sixty-seventh year of his ministry.

George was born on 9 December 1889 at Keighley, Yorkshire, to parents James, a plumber and gas fitter (1911), and Elizabeth.

Before entering Hartley, George was a solicitor’s clerk (1911).

During WW1 he enlisted in 1915 from Hartley and saw active service in France. He was a sergeant in the 135th Field Ambulance Service, 40th Infantry Division.