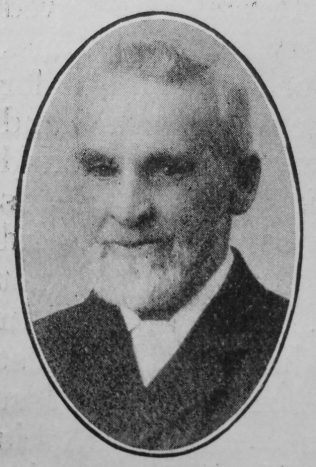 Mr. Samuel Jeffery, Wrexham Circuit, passed to the “higher service” on October 28th, 1907. He was born at Bradwell, Derbyshire, February 21st, 1834. Converted in early life, he soon became an accredited Local Preacher, and his abilities in this and other respects soon marked him out for our ministry. For a few years he laboured arduously therein and had to do with the opening of the Mission at St. Ives, Hunts, but his health failing, he was compelled to abandon this much-loved work and enter into business. The high esteem in which he was held by the Wrexham Circuit officials was shown by his appointment as Circuit Steward. He was Delegate to District Meeting and Conference on several occasions and his able and glowing sermons at the Douglas and Fleetwood District Camp Meetings are not forgotten to this day.

In 1885 the Circuit presented him with an illuminated address and Bible as a token of the high esteem in which he was held and appreciation of his valuable services during the long period of twenty years. For another twenty-two years he was permitted to render service for the Master and the Circuit, and was in great request as a preacher for special services. Increasing infirmity compelled him during the last few years to considerably restrict his labours, but be always continued to be deeply interested in the work of our Church and especially in the Centenary Celebrations. His end was peace.

The body was buried in Minera Churchyard, the service conducted by the Rev. R.W. Burnett, Mr. J. Steen taking part, the address being given by Councillor E.B. Evans, ex-Mayor of Wrexham. The Rev. R.W. Burnett conducted the memorial service at Coedpoeth Chapel where our brother had for many years been a member.

Samuel was baptised on 20 April 1834 at Hope, Derbyshire. His parents were Thomas, a lead miner, and Elizabeth.

He was married to Margaret (b abt1834). I have not been able to identify a marriage record or a death record for Margaret who died before 1901.