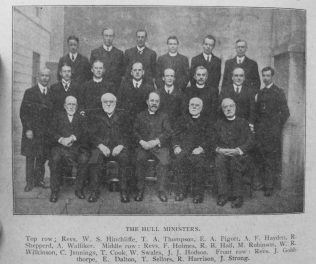 zoom
Charles is in the middle row, 5th from the left.
Primitive Methodist Magazine 1920

CHARLES JENNINGS: born at Bloxwich, Staffordshire, in 1871, into a Methodist family, and greatly influenced by a Bible Class there which produced many candidates for the Ministry. Offering himself for the Primitive Methodist Ministry in 1895, he was almost immediately sent out as a supply, and there followed a faithful and successful ministry at Crowle, Watford, Weobly, Nantwich, Brierly Hill, Ludlow, Hornsea, Blaenavon, North Cave, and Luton. Then came twelve years in Hull, after which he came to Wakefield in 1930, where he settled on his retirement from the active work in 1934.

He suffered much physical weakness in his later years, but he had a resilience of spirit coupled with a natural charm that endeared him to all who knew him. He was a humble man who shunned the limelight, and possessed a gentleness which hid an underlying strength of character which, when occasion required, showed itself as firm as a rock. His humour was a sheer delight, and there was a characteristic twinkle in his eyes which sprang from his joyous and confident faith. He was at his best as a preacher, offering only the product of a mind that was stored with a rich harvest of wide reading and deep thinking. His intense interest in people, both young and old, was displayed in his natural courtesy and understanding, and made his pastoral work particularly appreciated.

On 9th February 1956 he passed peacefully away, in the eighty-fifth year of his age and the sixtieth of his ministry.

Charles was born on 23 August 1871 at Bloxwich, Staffordshire, to parents Charles Jennings, an awl blade maker, and Caroline Benton.

Before entering the ministry, Charles also worked as an awl blade maker.

He married Annie Dent (1879-1964) in the summer of 1901 in the Thorne Registration District, Yorkshire. Census returns identify three of four children.