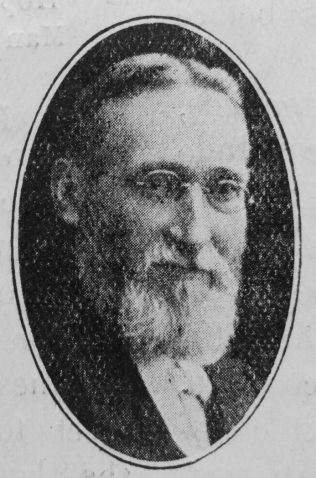 Transcription of obituary published in the Primitive Methodist Magazine by Jas. Young

The subject of this memoir was born at Shotton Colliery, Co. Durham, on July 4th, 1858. Happily his parents were godly people, and trained their family in the nurture and admonition of the Lord. These home influences touched him in his early years, and at sixteen years old he consecrated himself to God. He joined the Primitive Methodist Society at Tudhoe Colliery, Spennymoor Circuit, in 1874. In 1877 he was put on the local preachers’ plan, and transferred to Hebbron, South Shields Circuit, in 1878, as a local preacher on trial.

His intellectual and moral progress was rapid, and in 1879 he was recommended for the ministry, and his examination reported as “unusually excellent,” but his health not being robust he was declared physically “unfit.” In a short time he recovered his health, applied next year, 1880, was received, entered the Sunderland Institute, and proved a diligent and successful student. In 1881 he entered on his ministry, and three stations were supplied by him during that year, viz., Downham Market, Bedford, Bognor in the Chichester Station.

The next two years he laboured in Dover Station, and the last year of his probation at Maidstone. Having finished his four years’ term he was received on the approved list, and married Miss M.C. Garner, of Bedford, and found her a “helpmeet” in the best sense. Under the G.M.C. he travelled in Chelmsford; Tunbridge Wells, and Macclesfield stations; he then returned to his native district, and spent the next sixteen years at Hetton, Gatehead II., and North Shields. In the latter station he built three chapels, Percy Main, Shiremoor, and Whitley Bay. A new manse has also been erected at Hetton, and other improvements carried out at Easington Lane, etc.

In the Sunderland and Newcastle District he was soon recognised as a leader among his brethren, both in administrative ability and pulpit efficiency. His knowledge of rule was beyond the ordinary, as his book, “A Guide to the Connexional Rules,” abundantly evidences.

His work was done at an enormous cost, for premonitions of heart affection began to show themselves, and his breakdown in the Gateshead II. and North Shields stations awakened the utmost concern among his relations and friends. His eminent medical attendant, Dr. Martin, of North Shields, advised a change to the South of England to recuperate his exhausted strength, and he took a two years’ service in the Luton Third Circuit, but he was unable to bear the strain of pulpit work. He then came by special arrangement to Darlington station, but, alas, his days were numbered, and he came to spend, some time with his brother, Mr. Thomas Johnson, at Gateshead. The present writer saw him on this occasion and found him calmly resting on the sure foundation, Christ Jesus his Lord. After lingering a week or two, on Monday, March 29th, 1909, he ascended to his Lord. On the following Thursday, April, 1st, a large number of ministers and laymen from the districts round came to pay their respect to the memory of a brother beloved.

A service was held in the Durham Road Primitive Methodist Church, conducted by Rev. J.S. Nightingale, assisted by Revs. W. Bowe, H. Pratt, W. Barton, B. Dennison, and, others. Rev. Jas. Young gave an address, and the large congregation was deeply moved by references made to the departed, and sympathy with the mourning family and friends. At the Gateshead Cemetery the Revs. H. Yooll and M.P. Davison tenderly and impressively conducted the committal service.

Our departed brother in the Lord realised the advantages of home religious training, and gave the best of his early life to God and received grace to serve his day and generation. His best abilities were cultivated and consecrated to his Master’s service. He was above the average in his equipment for ministerial work. His intellect was clear and keen, and his views broad, comprehensive and practical. His memory was remarkably retentive and well furnished. His nature was social, genial and sympathetic. His ministry was rich and resourceful, and he was distinguished as a preacher, rising at times to unexpected heights, yet he often mingled playfulness with profoundness. His was the ministerial official mind, and he filled the chief offices in the district for many years, and had his health been vigorous, he would have taken conferential rank. He was a brotherly soul, we could get very close to him, as some of us know, and found in him a matured and rich experience. He was not faultless, but he was pre eminently faithful in his friendships and services. Though he has gone he has left an only son to our ministry, who enters on his work at this year’s Conference. For him, his dear widowed mother and sisters, as well as all his relations, we pray for a gracious and sustaining Providence that shall make their loss a true gain.

He married Caroline Garner (1858-1925) in the summer of 1885 at Bedford, Bedfordshire. Census returns identify four of five children.