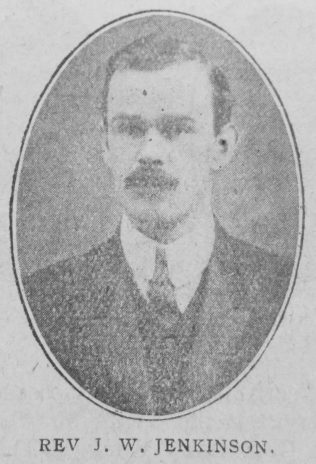 JOSEPH WILFRID JENKINSON: born in 1884 at Whitehaven, Cumberland. He was the son of a local preacher, and one of a large family, all of whom became devoted Methodists. He received his early education at St. Nicolas’ School, Whitehaven, and on his acceptance for the ministry went for his training to Hartley College, Manchester. The stamp of his northern home was always upon him, and showed itself in the fine vigour of his evangelical preaching. He began his probation in 1909 in Shrewsbury and ended his active ministry in the Banks and Hesketh Bank Circuit, Southport, in 1951. He poured out the riches of his mind and soul in devoted service. His circuits were Shrewsbury, Manchester IV, Retford, Birkenhead I, Hull (Portobello), Rhosymedre, Letchworth, Widnes, Rochdale, and Southport. As Secretary of the Primitive Methodist Ministers’ Friendly Society he served his brethren with devotion and kindliness. He was Secretary of the Chester and Warrington District for six years. His journalistic gift was happily exercised in reporting Conference proceedings. People were enriched by his fine preaching, his excellent judgement, his happy friendliness, and his wise administration. In 1951 he became an active supernumerary and took pastoral oversight of St. John’s Church, Prestatyn. He was only spared to minister there for one year, but during that brief period endeared himself to his people. Under his supervision the work prospered both in the Sunday School and in the Church, and great things were hoped from his ministry. He passed away suddenly and unexpectedly on August 18, 1952, in the seventy-eighth year of his age and the forty-fourth of his ministry. Those who knew him will cherish many happy memories of his fine Christian character, his friendliness, and his service.

Before entering the ministry Joseph worked as an accounts clerk.